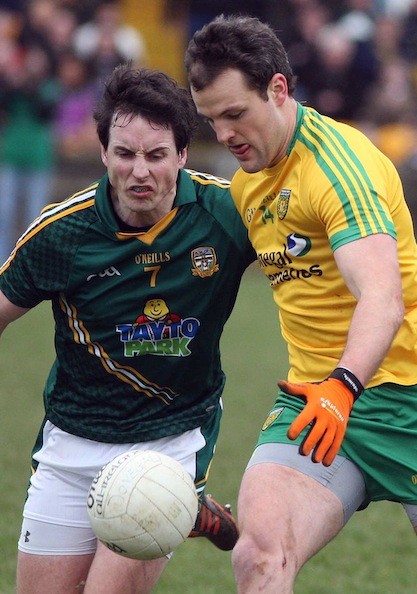 A determined second half display culminating in a last-gasp point by Michael Murphy saw Donegal grab a draw against a determined Meath at MacCumhaill Park this afternoon.

The visitors weren’t given a chance coming to the North-West for this league encounter today but their panel had different ideas.

Jim McGuinness’ team, helped by a goal by Frank McGlynn, managed to narrow the gap to just two points, going in 1-7 to 1-5 at the interval.

The league leaders were suffering in the middle of the park and the manager tried to address this my bringing on Neil Gallagher for Rory Kavanagh at half-time.

He also added some penetration up front by drafting in Darach O’Connor in place of Brick Molloy.

It appeared to have the desired effect as Donegal began to pick off the points.

But Meath refused to wave the white flag and points from Graham Reilly and Michael Newman kept them in contention.

In a nip and tuck second half, both sets of forward swapped points and the advantage as they raced to the final whistle in front of a large crowd. Donegal fluffed two goal chances too.

Reilly looked as if he had done enough to secure the points for Meath putting them ahead 1-12 to 1-11.

However, Murphy was given a late free but when it popped it short, you sensed that Donegal had blown their chance and their 100% league record.

Meath must have been kicking themselves when the big Glenswilly man got yet another chance fro a free to level the scores.

This time he didn’t miss.

The visitors will feel short-changed but Donegal will draw encouragement from a game in which they had to dig deep.