PAT THE COPE TO CONCENTRATE ON JOB CREATION IF ELECTED

Pat the Cope Gallagher MEP has promised he will concentrate on job creation if re-lected to the European Parliament. 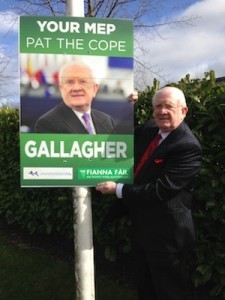 The Donegal politician was selected unanimously at the Fianna Fail Midlands,West and North West Selection Convention yesterday in Mullingar.

Speaking at the Convention he stated that if re elected that a priority is promote job creation and growth.

He also stated that we need to fully and effectively implement policies to deal with long term and youth unemployment ,by maximising funding for Ireland under the Youth Guarantee,the Youth Unemployment Initiative and European Social Fund and Erasmus Plus.