Leading Donegal jockey Martin Harley has been hospitalised after a heavy fall while taking part in a race in England. 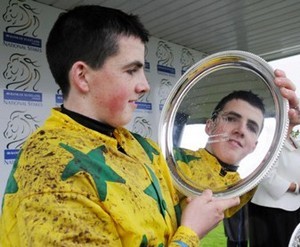 Jockey Martin Harley has been hospitalised after fall.

Martin, from Trentagh outside Letterkenny, fell heavily from his horse Red Alert at Lingfield earlier today.

It is not known how bad his injuries are.

The incident happened when Harley was riding the 7-4 favourite Red Art in the Ladbrokes Mobile Handicap.

Harley was taken to hospital by ambulance but racing was delayed for more than an hour and a half as a result.

Harley was closing on the leaders inside the final furlong when Red Art clipped the heels of horses in front of him.

The horse fell heavily and suffered fatal injuries. Harley was thrown hard to the ground and had to be taken to East Surrey Hospital in nearby Redhill.

Presumido (5-1) held on to win the race, by half a length from Alnoomaas, and the trainer Simon Dow said: “It’s a hollow victory when something like that happens, and our thoughts are with Martin and the other connections.”