GRITTERS OUT AGAIN AS HEAVY FROST, SLEET AND SOME SNOW EXPECTED

Motorists have again been advised to take care if travelling across Donegal tonight with a heavy frost, sleet and even some light snow forecast. 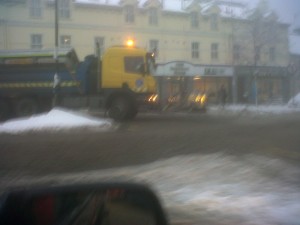 Gritters will be back on Donegal’s roads in the morning.

Temperatures are again set to plunge to freezing as night falls.

Flurries of snow are expected to fall on hills and higher ground but showers of sleet and hail are also expected to be widespread.

There were widespread falls of sleet across the county last night with many hills being covered in a light dusting of snow this morning.

Motorists traveling in the county tomorrow morning are also advised to take care with a sharp ground frost expected to set in.

Donegal County Council has confirmed that gritters will be out on the county’s road tomorrow morning.

Temperatures are expected to pick up again in the coming days.