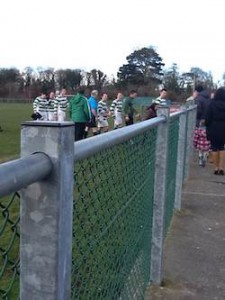 BY CHARLIE COLLINS: Leaders Rathmullan Celtic were beaten 1-3 by reigning Champions Lifford Celtic at Flagpole Park today in a vital Top of the Table clash.

Eamonn Sheirdan gave the home side the lead in the 19th minute but 8 minutes later Rathmullan’s winger Ryan Connelly was shown a straight Red card by Referee Kevin Logue.

Lifford Celtic made their numerical advantage count in the second-half and goals by Marcus Mc Donald and the Gethins brothers Alan and David saw them through to a comfortable and vital win.

This result means things are really tight at the top of the table with only 5 points separating the top Five teams.

FULL ROUND-UP OF ALL THE GAMES ON DONEGALDAILY.COM LATER