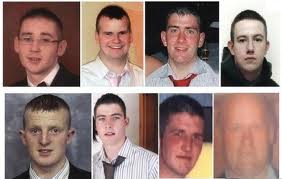 A Judge has demanded that a man accused of killing eight people in one of Ireland’s most high-profile road accident cases be immediately psychologically assessed.

Those killed in the Inishowen crash.

Shaun Kelly, 24, is accused of causing the deaths of eight people outside Clonmany in Inishowen in July 2012.

The case against Kelly has been adjourned on several occasions and was due to be heard this morning.

However both the defence and prosecution teams said they were not yet ready to press ahead with the case.

Both said they are currently awaiting reports including one from a psychologist from the Central Mental Hospital in Dublin.

However, Judge Keenan Johnston said he was refusing to adjourn the matter out of the current sittings of Letterkenny Circuit Court.

He said it was grossly unfair to both the families of the deceased and the accused that the case was dragging on.

Both barristers Peter Nolan for the defence and Patricia McLaughlin for the prosecution argued that they were trying their best to speed the case along.

Barrister James O’Donnell said he was keeping a ‘watching brief’ for the families involved in the case and said they were extremely anxious to get the matter resolved.

Judge Johnston said both he and his colleague Judge John O’Hagan had tried on several occasions to have the case heard.

“I am acutely aware that there are eight families grieving. Their lives are on hold and it is unfair that this is ongoing,” he said.

He said he was not prepared to adjourn the matter until the next sitting of the circuit court.

He adjourned the case until next Tuesday and ordered and told Ms McLaughlin to attempt to have a psychologically examined and to get a report on the accused.

Judge Johnston then reassured the families that he will “do our level best to get the matter brought to trial as soon as possible.”

Mr Kelly, of Hill Road, Ballymagan, Buncrana, was in court, accompanied by his parents.