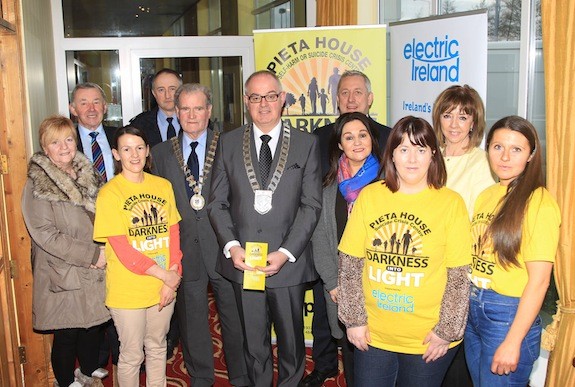 A Donegal woman has spoken of her heartache at losing her brotehr to suicide.

Donna Maskery spoke at the Darkness into Light Donegal which was officially launched at The Clanree Hotel on Friday last.

There was a great turn out and Donna (nee Scott), chair of the Donegal Darkness into Light committee who lost her brother Aaron Scott just fifteen months ago.

Donna told those gathered “My brother Aaron lost the silent battle we didn’t know he was fighting, I want to know if someone is struggling there is somewhere in our county they can go to get the help they need when they need it”.

Taking place on Saturday, 10th of May, Darkness into Light is a unique, early morning experience which begins in darkness at 4.15am as thousands of people walk or run a 5km route while dawn is breaking.

The early dawn represents hope and is symbolic of the work of Pieta House; bringing people from darkness back into the light. Donegal Darkness into Light will start at 4:15am at the Community Centre in Letterkenny.

Pieta House is a suicide and self-harm crisis centre founded in Lucan, Co. Dublin in 2006 by psychologist Joan Freeman. With nine centres throughout Ireland, Pieta House provides a professional, one-to-one therapeutic service for those who are experiencing suicidal ideation or engaging in self-harm.

A doctor’s referral or a psychiatric report is not required and the service is completely free of charge.

To date, Pieta House has supported more than 12,000 people, with almost 4,000 of those seeking help in 2013. Pieta House’s vision is to have a centre within 100 kilometres of everyone in Ireland.

Speaking at the launch of Donegal Darkness into Light, Joan Freeman, CEO and founder of Pieta House, said: “Darkness into Light is an incredible experience and one that people remember for a long, long time. There’s already huge anticipation and with so many new locations involved for 2014 it’s going from strength to strength.

“We’re tying this year’s event in with our Mind Our Men campaign that aims to reduce male suicide in Ireland, so I want to ask everyone to bring a male friend or family member with them. We’re making a big push this year to get all the men out – it means an early rise but they won’t regret it.”

Darkness into Light 2013 attracted 40,000 participants in 20 locations around Ireland. With this year’s event taking place in 39 locations, Pieta House is hoping for a near doubling of last year’s turnout.

Register online by visiting dil.pieta.ie or alternatively attend one of the pre-registration events taking place throughout the county on Saturday, 26th April from 2pm – 4pm. These will be held in the Abbey Hotel, Donegal Town, Mac Cumhail Park, Ballybofey, The Cope, Dungloe, and Letterkenny Shopping Centre. You can also register on the morning of 10th May but pre-registration is advised.

If you would like to volunteer, marshal or sponsor the event, please contact Donegal Darkness into Light at www.facebook.com/DILDonegal.