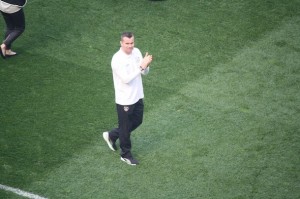 SHAY Given’s nightmare time at Aston Villa is over – after he was appointed as an assistant to manager Paul Lambert last night.

Given, who has not made an appearance for Villa since January 2013, was sent out on loan to Middlesbrough on November 28 but returned to Villa Park at the end of February.

“As players, it’s important that each and every one of us take responsibility right now and I’m delighted to play my part in helping the manager and the team go and try to win on Saturday,” said Given in a statement on the Midlands club’s website.

“I’m delighted to have Gordon and Shay to assist me in preparing the team for Saturday which is what the whole group is focussed on,” said Lambert.

SHAY GIVEN BROUGHT IN FROM THE COLD AT ASTON VILLA AS HE TAKES ASSISTANT ROLE was last modified: April 16th, 2014 by John2
Tags:
Aston VilladonegalShay Giventemporary assistant