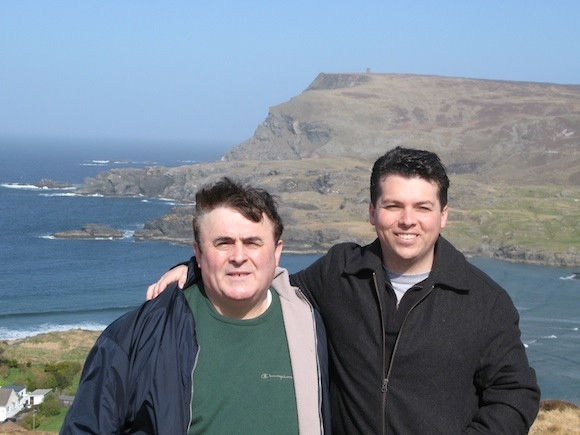 ‘MY LOVE FOR DONEGAL’ BY POLITICIAN RUNNING FOR US CONGRESS

Brendan Boyle and dad Frank on a visit home to Glen

THE son of a County Donegal man who is running for Congress has spoken of his love for the county of his father’s birth.

Brendan F. Boyle is already a Democratic member of the Pennsylvania House of Representatives.

At the weekend we revealed that his father Frank is a native Irish speaker from Glencolmcille who left Ireland in 1970 aged 19.

Son Brendan is the state representative from the 170th District, which covers parts of Northeast Philadelphia and Montgomery County. His brother Kevin also serves Pennsylvania, following in his brother’s footsteps in 2010 – to become the first brothers to serve together in the state legislature.

And you know Brendan hasn’t lost his connections to here when he calls Glencolmcille…Glen!

Brendan told Donegal Daily: “I’ve been to Donegal many times. I think it’s one of the most beautiful places in the world. Of course, I guess I am a bit biased.

“My brother Kevin, who is also an elected official in the state House, decided to have his wedding in Donegal in 2011. It was a wonderful time.”

Their father Frank works as a janitor on the state’s transport system – and goes out canvassing for his son in the evenings.

The working class rooted family are having to face-off against the wealth of the Clintons in the campaign (that’s former President Bill!)

Wealthy Marjorie Margolies (71), is also running for the seat – she is Chelsea Clinton’s mother-in-law!

‘MY LOVE FOR DONEGAL’ BY POLITICIAN RUNNING FOR US CONGRESS was last modified: April 21st, 2014 by John2
FacebookTweetLinkedInPrint
Tags:
Brendan F BoyleGlencolmcilleHouse of RepresentativesUS COngres