Pat The Cope Gallagher has appealed to Donegal voters to get behind him after a new opinion poll suggests he has a fight on his hands to retain his seat in the European Parliament. 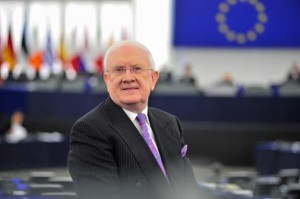 The remaining two seats would appear to be a battle between sitting Fine Gael MEPs Jim Higgins and Mairead McGuinness with 11% and Luke Ming Flanagan on 12%.

Although it is early days yet, the polls suggests that the veteran Donegal politician is on 9% with a tough road ahead of him.

But Pat The Cope Gallagher told Donegal Daily that he is prepared for the fight of his political life.

However, he said he could not do it without the support of the voters of Co Donegal.

“I have given my life to Donegal politics and now I am up against it. Donegal needs a voice in Europe and I am determined to be that voice.

“We need a voice at the table as funding from Europe continues to be handed down and I am determined to be that voice to ensure that the people of Donegal are looked after,” he said.