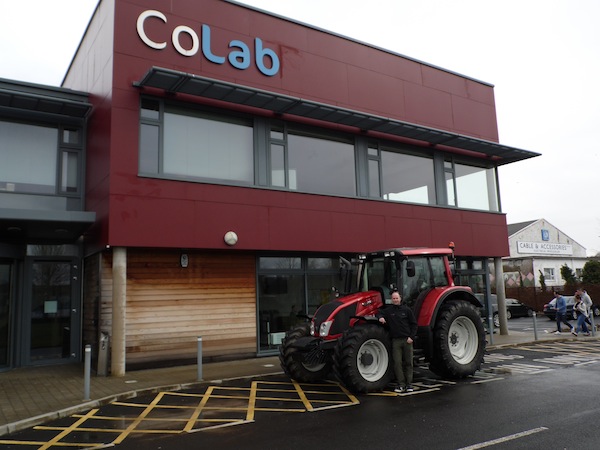 Gareth Devenney at the CoLab where his company will create 22 jobs.

Gareth and Jason Devenney are about to launch Farmflo, a world-class software which will have its offices at the CoLab at LYIT in Letterkenny.

The company initially got startup help from Enterprise Ireland and have now secured their first external funding round of €100,000 from angel investors.

Since founding the company in 2012, the brothers, who were raised on a farm in Donegal, have been beta testing their farming compliance management software with 200 farmers.

Co-founder and farmer Gareth Devenney said “Having conducted extensive development and testing over the past two years, we know our software makes compliance easier for farmers, saving an average of 20 hours administrative time per month and securing farmers’ incomes. This investment allows us to build upon our experience and begin making farmers lives easier throughout Ireland and beyond.”

His brother Jason Devenney, an experienced software developer, added that they know from the trials over the last two years that our software delivers.

“Farmers can enter information into their tablet or smartphone in the field or barn as they go about their day and sync when they get back home eliminating much of the paperwork that farmers or family members are currently doing in the evenings. Compliance reports can then be generated as required.”

The company plans to use the investment to begin recruiting staff at their new location in the CoLab facility at the LYIT Letterkenny.

Jason continued “Our software has been created by farmers for farmers so it feels right that we establish ourselves in Donegal in the heart of the farming community. Our goal is to build a world class farming compliance software company right here in Ireland securing sustainable jobs in the community as the company develops.”

The company is opening eight vacancies immediately across a range of disciplines including research and development, sales, marketing and administration.

Further vacancies will be opened later in the year once the company has secured their next funding round.

Gareth concluded “We will have at least 22 employees by the end of 2015 based in Letterkenny with the potential for more sales and marketing roles across Ireland and the UK.”

It saves the farmer many hours of labour intensive administrative work per week and providing peace of mind knowing their compliance and information provision requirements are taken care of.

Arena 7 is hiring for various positions