FALCARRAGH TO HOLD ITS FIRST EVER MAY DAY CELEBRATION 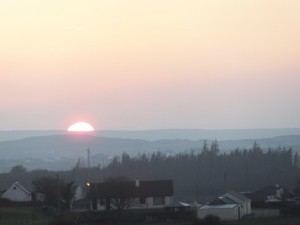 For the first time ever, the ancient feast day of ‘May Day’ will be celebrated in Falcarragh, west Donegal. It will take place this Saturday afternoon at 2pm.

Originally, in Pagan times, a day commemorating the feast of Bealtaine, in May 1890 it became a holiday recognising international workers’ day and the fight for better working conditions.

“We decided to celebrate it as an act of solidarity with our own working people, many who have been made unemployed or who have been forced to emigrate over recent years,” said Owen Curran, one of the leaders of the four-year-long ‘Cloughaneely Can’t Pay, Won’t Pay’ campaign against household charges, and now water charges.

“The stark facts are that despite the Government telling us we’re ‘turning the corner,’ mass un-employment and emigration remains the reality here. More than 400,000 people are on the live register with many more on ‘Job Bridge’ type schemes. Our young people continue to emigrate.”

Curran believes there are two reasons for continuing unemployment.

“One is the slump in demand because of the cuts to peoples incomes. The second is lack of investment. Meanwhile, large profits are being made and wealth has increased for the rich. Oxfam estimates that the super-wealthy have 700 billion euro stashed in Irish bank accounts.

“The policy of incentives for the private sector to create jobs clearly has not worked. It most certainly has not worked in the Gaeltacht where Udaras has spent large sums of tax-payers money since their foundation. The result: mass unemployment levels and emigration from the area. What is needed is a real jobs plan, with investment channelled into a programme of necessary works such as school building, the fitting of buildings for rain-water harvesting, upgrades to sewage and water infrastructure, with work to begin immediately.”

The ‘May Day’ event begins at Falcarragh crossroads at 2pm Saturday.

There will be an open-mike discussion on pertinent issues such as local and national government job-creation strategies, as well as the planting of a tree in solidarity with all those from the area who have been made unemployed or forced to emigrate.

Mr. Curran added that there will also be music and song, “because in the words of Emma Goldman, political activist, writer and feminist, ” If I can’t dance to it, it is not my revolution.”

‘Youthreach was one of the best decisions...

US visitor crosses the Atlantic to celebrate...

Donegal woman making a difference on her...