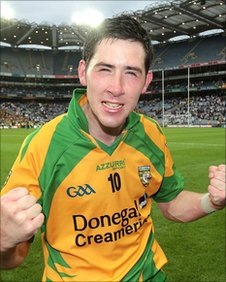 SHOCK AS MARK McHUGH AND THREE OTHERS QUIT DONEGAL SQUAD

Donegal All-Star forward Mark McHugh is one of four players who are understood to have sensationally left the county team.

McHugh’s shock departure comes less than a month before the county’s Ulster Championship clash with Derry.

No reason has been given for the departure of McHugh and three other fringe players.

The squad have recently returned from a team-building and warm weather training period in Portugal.

Three substitutes, Thomas McKinley, Gary McFadden and Anton McFadden, are believed to have joined half-forward McHugh in walking out.

Donegal manager Jim McGuinness has not yet confirmed the departure of the players.

McHugh was not at training on Tuesday leading to speculation about his departure.

The last eight Ulster match against Derry is on Sunday, 25 May.

Donegal lost 1-16 to 1-10 in the Football League Division Two final at Croke Park last Sunday, a match in which Kilcar clubman McHugh was a substitute.

McHugh won an All Star award in 2012 after helping Donegal to All-Ireland Championship success.