HOLY COW – JAMES PAT IS REALLY GETTING HIS CAMPAIGN MOO-VING!

written by Stephen Maguire May 6, 2014
FacebookTweetLinkedInPrint 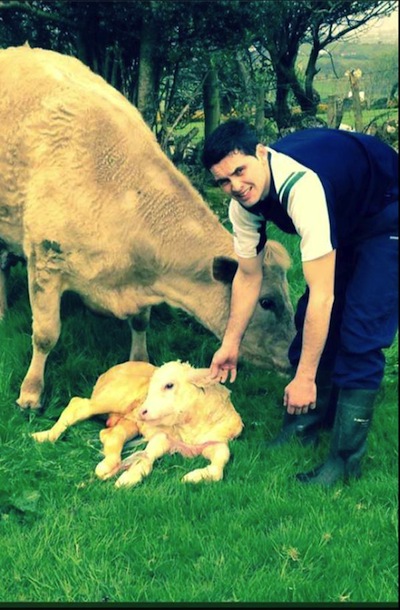 James Pat McDaid is certainly getting his election campaign moooo-ving!

The young local Fianna Fail candidate had to take time out of his canvassing schedule last week in order to attend the emergency birth of this young Charolais calf, on his family farm in Glenkeeragh, New Mills, Letterkenny.

Young James Pat, who has farming in his blood, confirmed that he is now on call 24/7 during the election campaign, in order to ensure his father has sufficient help on the family farm during this busy time of year.

“It’s all early mornings and late nights now for the next few weeks!”

Coming from a farming background, James is only too well aware of the worsening position for Irish farmers with recent news confirming a stealth cut to the Single Farm Payment, which will hit low income farmers this year.

The change was brought in during Fine Gael Minister Simon Coveney’s tenure as President of the European Council of Agriculture Ministers, however the cuts are only becoming apparent as the small print of these deals emerge.

“However, in response to a parliamentary question, Fine Gael Minister Simon Coveney has admitted that any farmer receiving a payment of more than €5,000 will have a 10.49% “linear deduction” imposed on the full amount of their funding. This equates to a cut of €452 for a farmer in receipt of a payment of €5,001. However, as the payments increase, the deductions reduce and actually result in increased payments for farmers receiving €50,000 or more.”

James Pat refers to comments made by Fianna Fail Spokesperson for Agriculture, Deputy Éamon Ó Cuív, citing that “this is another body blow for low income farmers and is creating a feeling of hopelessness amongst the farming community where it seems all the focus is on those with large farms on very good land. In other words everything is focussed on the top 15% and there seems to be a conscious effort to try to drive many of the smaller farmers or farmers on marginal land out of business by wholesale cuts to payments and multiple schemes with ever more red tape”.

“I’m calling on farmers to protest against these cuts in the most effective way possible – by using their vote. I believe if we want a fair CAP that treats all sections of farming equally and ensures the continuation of family farming in Ireland it is imperative for farmers and their families and the rural community in general to send a strong message to the Minister and the Government that the present proposals are unacceptable and that they need to be radically changed between now and August the 1st, the deadline for informing the EU on Pillar 1 decisions.

“The upcoming local and European elections give all citizens the opportunity to show the Government that the measures they’ve brought in over the past three years have damaged rural communities and the small farming sector in particular. I’m urging all farmers to use their vote to demand change and ensure a fairer system for all”.