written by Stephen Maguire May 9, 2014
Facebook0Tweet0LinkedIn0Print0

Letterkenny Town Council is to afford one of its last civic receptions to one of its best-known citizens – shopkeeper Paddy Delap. 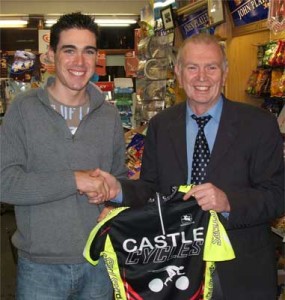 Paddy with one of his biggest fans, cyclist Phillip Deignan.

The well-known businessman, who runs Clarke’s Newsagents at Lower Main Street, will be given the honour on Thursday next, May 15th.

Paddy is being given the honour in recognition of his contribution to his community and also to his involvement with the Sligo to Letterkenny Charity Cycle.

The charity cycle has raised a staggering €500,000 in the past 21 years in aid of Cancer Research.

The reception will take place at the council chamber at 7pm.

And Paddy, a staunch Man Utd fan, has even said that Liverpool fans will be welcome.

LETTERKENNY TO GIVE A CIVIC RECEPTION TO ONE OF ITS BEST-KNOWN CITIZENS was last modified: May 9th, 2014 by Stephen Maguire
Facebook0Tweet0LinkedIn0Print0
Tags:
civic receotionLetterkenny Town CouncilPaddy Delap