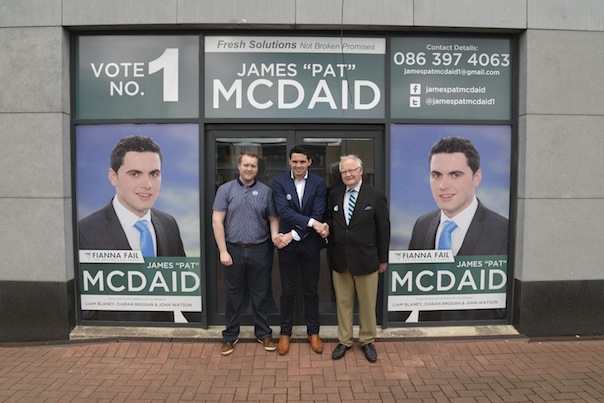 Fianna Fáil local election candidate for Letterkenny James Pat McDaid says the elderly people of Donegal have an opportunity to send a clear message to the Government of broken promises on May 23rd.

Mr McDaid said the targeted attack on the elderly since the Government assumed office has severely affected their quality of life.

“Many elderly people throughout Donegal have watched in horror as the Government cruelly introduced cut after cut that has resulted in many being forced into poverty.

“Elderly people have been brutally betrayed by the Government in recent budget cuts, which Fianna Fáil have vehemently opposed. There is a fairer way to reach our budget targets by progressive taxation but the Government has ignored the alternative measures put forward by Fianna Fáil.”

He added that prescription charges have been increased five-fold despite the Minster for Health promising to abolish them; the telephone allowance, which many people in rural areas of Donegal relied upon was abolished; over 1 million home care hours were cut; the Fuel Allowance was reduced from 32 weeks to 26 weeks and just last week the Carbon Tax was doubled.

“How can Government representatives defend the litany of cuts? Even more cynical has been the continuing denial by the Government that Medical Cards have been targeted over the last 18 months. The Taoiseach repeatedly denied when questioned by Fianna Fáil that there was a policy change to cut the amount of discretionary medical cards.

“Eventually the Taoiseach and the Government were shamed into admitting that discretionary Medical Cards have been targeted.

“The treatment of elderly people by this Government has been appalling. The local elections on May 23rd will present elderly people with an opportunity to have their say on the sustained cuts they have been subject to.”