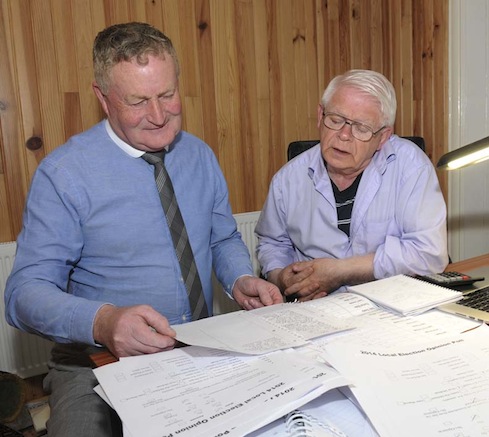 written by Stephen Maguire May 15, 2014
FacebookTweetLinkedInPrint

John McCreadie of Stewart and MacLochlainn Accountants with Tirconaill Tribune Editor John McAteer at the completion of the Local Election Opinion Poll.

The election opinion poll published in this week’s Tirconaill Tribune for the Letterkenny/Milford Electoral Area shows non-party candidates are set to win almost 43% of the first preference vote.

And it is no big shock that there is a huge degree of apathy on voter intentions amid an urgent demand for a new political party.

The poll among 500 people in the area shows party profiles since the last local elections in 2009.

Politicians who’ve been interpreting the poll say that turn away from mainstream politics is a clear manifestation of the demand nationally for a new political party.

This poll shows a number of other factors as seen through the views of the electorate and 35% of those polled do not intend voting at all.

At the same time there is a factor of a further 40% that is undecided what way they intend to vote. 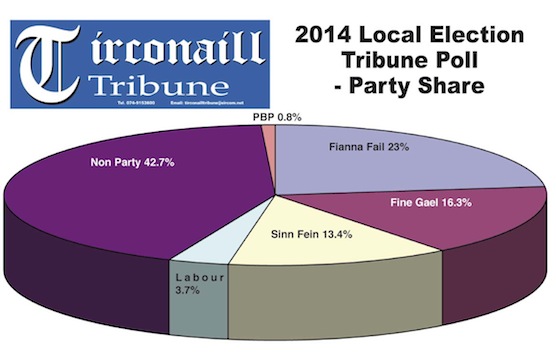 A graph of the Tribune’s poll

One of the interesting stats from the poll is that more than half of the ‘undecided’ are non-party.

However this is where real indecision raises its head in that 60% this group may not make up their minds until they visit the polling station and see the ballot paper. Their votes could cause a real upheaval as the final seats are decided.

The Tribune poll also asked voters for a verdict on the performance of the Government and Irish Water.

The results are quite shocking with only 12% expressing satisfaction with the Government and 96% of the poll is outraged with the prospect of water charges next year.

Fianna Fail looks well placed to win two seats but once again there is no distinct evidence of vote management to ensure they hold their third seat.

This will come as good news to the chasing group of four, albeit they are under half the projected quota.

The leading group includes Liam Blaney: Ian McGarvey: Ciaran Brogan and Mick Quinn all within shouting distance of the quota and above a 7% first preference figure.

They are followed by Noel McBride and John O’Donnell with the quota at 9% of the turnout Michael McBride and Gerry McMonagle are also doing well to give a solid enough choice for the first eight seats.

Jimmy Kavanagh of Fine Gael and James Pat McDaid of Fianna Fail are also within the top ten of first preference choices in the race for seats.

Tribune editor John McAteer said “That is the theory of the poll but the actual experience may well change in the coming week as pressure mounts for those last two elusive seats and a better vote management plan right across the entire panel, but especially in Fianna Fail where Blaney and Brogan have 76% of their party share.”