ELECTION 2014: EDDIE TINNEY IS CAUGHT BETWEEN BLACK-ROCK AND A HARD PLACE!

written by Stephen Maguire May 17, 2014
FacebookTweetLinkedInPrint 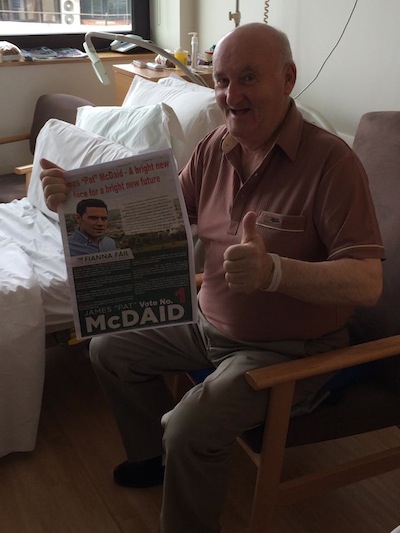 Eddie gives James Pat the thumbs up from hospital!

He may be in the Blackrock Clinic but legendary Donegal businessman Eddie Tinney is still keeping tabs on the local elections.

In particular he is watching the progress of James Pat McDaid whom he has been canvassing for of late.

James Pat was so concerned about the loss of Eddie that he sent his Director of Elections Niall Doherty up to keep the Letterkenny man abreast of affairs back home.

Eddie demanded a copy of all the local press issuings to ensure that he could scrutinise the recent poll conducted by John McAteer of the Tir Chonaill Tribune.

Word has it that the Director got a dressing down for not pushing the campaign hard enough!

Eddie had the following to say “I was gone, but when I saw the wee red fella with the two horns on his head, I decided to come back! Yee aren’t getting rid of me that easy. I’m getting the whole works done here now when I’m in, a real overhaul, and there’ll be at least another 70 years left in me when I get out. Anyway, I have unfinished business with James Pat’s election campaign and we only have a week left. I have given strict instructions to the Director in relation to how things are to be handled for the next week. We are in a good position, but we have nothing won yet. It’s all there for the taking. We need a big push on next week to seal the deal. It’s James Pat Number 1 all the way, and it’s a thumbs up from Eddie Tinney!”

James Pat wished Eddie all the best and told him to make sure he gets back to Letterkenny to vote next Friday!