written by Stephen Maguire May 19, 2014
FacebookTweetLinkedInPrint

According to the recent poll by the Tirconnail Tribune, there might be no women representing the Milford-Letterkenny area on Donegal County Council. 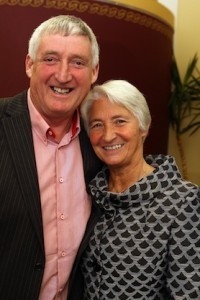 Grace Boyle with her husband James at the Town Hall in Ramelton for the launch of her campaign.

Speaking at the weekend, Grace Boyle called on the electorate to support women who put themselves forward.

“According to the poll carried out by the Tirconnail Tribune, I have a chance of causing an upset and taking a seat on Donegal County Council.

“But if the electorate don’t get behind me and the other female candidate, Siobhan McLaughlin of Labour, then we could be left with a situation where 10 seats are filled by 10 men.

“As far as I am aware, not one woman has been elected to represent this area – although women have been co-opted onto the Council over the years. Women bring a different perspective to life, community and business and a good mix of male and female representation is essential for a well balanced Council”.

Boyle said that many of the male candidates that have put themselves forward are businessmen of some type or another.

“While a good business head will be of great benefit in the Council – do we want a room full of businessmen representing our area? Whereas, if you look at the female candidates, we are community focused.

“I have been involved with community initiatives such as the Donegal Hospice, the North West 10k and the Donegal GAA for many years. I will need as many Number 1 votes as possible if I am going to have any chance of taking a seat”.

The well-known local community activist said you only have to look at what Fine Gael MEP Mairead McGuinness has achieved to see what a woman can bring to politics.

“She is currently topping the poll in the Midlands North-West constituency for the European election. I would call on the electorate to get behind your female candidates. It takes a lot of courage and determination to put yourself forward and it is only by electing female candidates that we will encourage more to come forward in future.”

POLL SUGGESTS NO WOMEN WILL BE REPRESENTING THE MILFORD-LETTERKENNY AREA – BOYLE was last modified: May 19th, 2014 by Stephen Maguire
FacebookTweetLinkedInPrint
Tags:
donegalElectionsGrace BoyleWomen