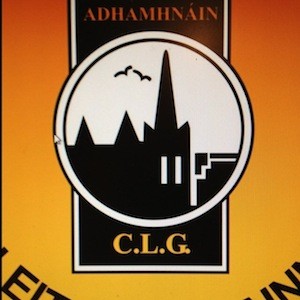 The Seniors suffered their first league defeat of the season away to N. Conaill on Sunday. Their next outing is on May 31st v Four Masters at home. The Reserves had another good win in their game and are also free this weekend.

The Juniors were beaten at home by Glenswilly on Saturday evening and have no game this week.

The Senior Hurlers drew their Ulster Táin league game with MacCumhaills and are in action again on May 31st in Garvaghey against N. Moninne with a 5:30pm throw-in.

The Senior ladies began their 13-a-side league campaign with a good win over Glenfin, they have no game this weekend.

The Minor Hurlers won the League final against Carndonagh on Thursday. The U14 hurlers play MacCumhaills in the A league semi-final at O’Donnell Park on Thursday at 7pm.

U14, U16 and minor hurling training continues every Tuesday at 5pm. New hurlers always welcome.

The U16 Boys footballers had a big win over Milford on Friday, they have no more games now before the exams. The Dev. Team lost to neighbours Glenswilly.

The U14 girl’s footballers had a good win over MacCumhaills on Tuesday to keep their semi-final hopes alive. They travel to N. Padraig, Muff next Tuesday. Training is on Thursday at 4.45pm.

The U10 blitzes begin this week with team 1 at home to Convoy and Milford this Friday (23rd). All players asked to be O’Donnell Park for 6:15pm.

Horses (€10) and Race sponsorship (€25) are now on sale for our Night at the Races on Friday week, May 30th. All players must return their cards by this Friday, May 23rd to their team managers. Big effort needed by everyone please.

St. Eunan’s GAA club would like to place on record our thanks to the members of Letterkenny Town Council that have been great club supporters over the years, in particular the late Cllr. Tadhg Culbert, Dessie Larkin, Ciaran Brogan, Jimmy Kavanagh and Tom Crossan. We would like to wish Ciaran, Jimmy and Tom all the best in the upcoming election and wish Dessie Larkin all the best for the future as he bows out of the political arena and moves on to other challenges. We also thank them all for their recent generous donations to our club.