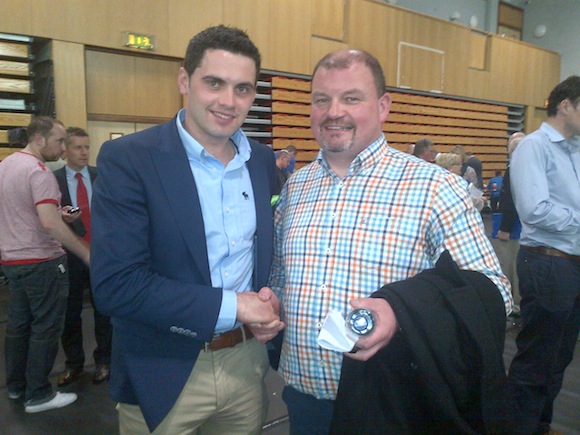 written by Stephen Maguire May 24, 2014
FacebookTweetLinkedInPrint

James Pat McDaid and Ciaran Brogan look like they are both heading for LIfford.

Brogan hadn’t canvassed in McDaid’s home patch and got just five votes there to allow the 25-year-old a clear run.

And the two are celebrating today as tallies point to both of them being elected.

“It worked well for both of us,” said Cllr Brogan.

“I am delighted with the support I received from across the electoral area.

“I am also delighted for James Pat because he is part of what Fianna Fail is about now and for the future.”

McDaid is now certain to join Brogan in County House in Lifford next month.

“I want to thank all those who voted for me,” he said.

“I am looking forward to Sunday’s count. If Donegal can beat Derry now at Celtic Park it will be a very good weekend indeed.”

FIANNA FAIL STRATEGY PAYS OFF AS McDAID AND BROGAN LOOK TO BE HOME AND DRY was last modified: May 24th, 2014 by Stephen Maguire
FacebookTweetLinkedInPrint
Tags:
Ciaran BrogandonegalElectionsfianna failJames Pat McDaid