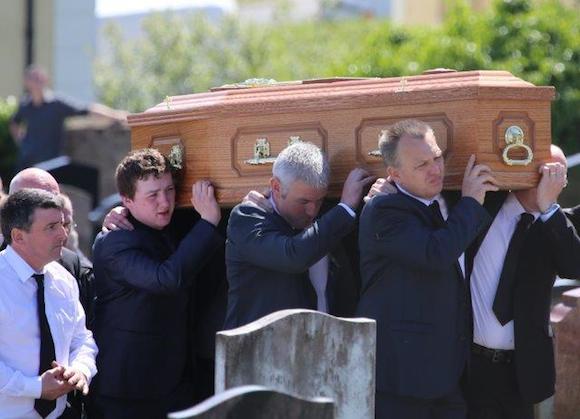 HEARTBREAKING SCENES AS TRAGIC OISIN IS LAID TO REST

THERE were heartbreaking scenes in the village of St Johnston today as hundreds and hundreds of mourners paid their respects at the funeral of popular local man Oisin Crawford, the man killed after taking ecstasy on Monday.

The 22-year-old was one of five people affected by a dangerous drug being sold in the county.

St Baithin’s Church in the village was packed to overflowing as they heard Monsignor Dan Carr plead with young people to stay away from drugs.

“I would like to give a message today to our young people and the message is very simple – keep away from drugs,” said the priest at the end of the Mass.

“Do not experiment with them; they are highly dangerous. Keep away from alcohol because alcohol is the first step towards drugs.”

Monsignor Carr described how Oisin loved working with his father Seamus at the family tyre business in Raphoe.

He loved stock car racing and got on with his dad more like two brothers than a father and son.

The priest said he hoped the Crawford family did not feel alone at this time because of how the community in the area had come together to support them at this difficult time.

Oisin was laid to rest in the adjoining cemetery, the cortege led there by a lone piper – with a guard of honour from his former school Deele College lining the route.

HEARTBREAKING SCENES AS TRAGIC OISIN IS LAID TO REST was last modified: May 28th, 2014 by John2