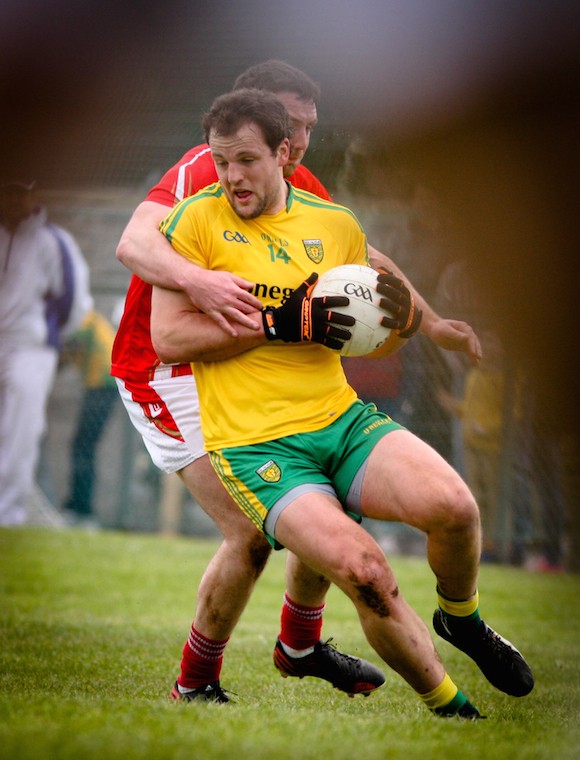 DONEGAL captain Michael Murphy has been voted the official gaa.ie Player of the Week.

The Glenswilly man’s performance against Derry at Celtic Park on Sunday had fans from all 32 counties voting online.

He had strong competition from Mattie Donnelly (Tyrone) and Shane Walsh (Galway) in the football vote, but the Donegal captain was a comfortable winner in the end getting almost half of the votes.

GAA.ie FOOTBALL PLAYER OF THE WEEK

The 2012 All-Ireland winning captain changed the game for Donegal against Derry, inspiring their comeback. Brought close to goal for the second half, his influence in the decisive third quarter was profound.

Two of his points in that period, his one from play and that incredible sideline ball from the right wing, will live long in the memory.

That stellar performance at the most crucial period of the game saw him pick up a huge amount of support on Facebook, more than enough to take him past Donnelly and Walsh, although they both polled very strongly.

Donnelly just pipped Walsh into second place after his dominant display from centre-half-back in Tyrone’s replay victory over Down at Newry on Saturday night. The Trillick St. Macartan’s man received 26 per cent of the vote.

In third place was Galway’s Shane Walsh. The Kilkerrin-Clonberne man was the star of the Galway team that won the U21 All-Ireland last year and against London he really announced himself at senior level, scoring 1-6 of his side’s tally in Ruislip, including 1-3 from play and a brilliant ’45’. He received 25 per cent of the vote.

Players of the Week are decided based on votes cast by followers of @officialgaa on Twitter and on the Official GAA Facebook Page.

MICHAEL MURPHY VOTED GAA.IE FOOTBALLER OF THE WEEK was last modified: May 28th, 2014 by John2