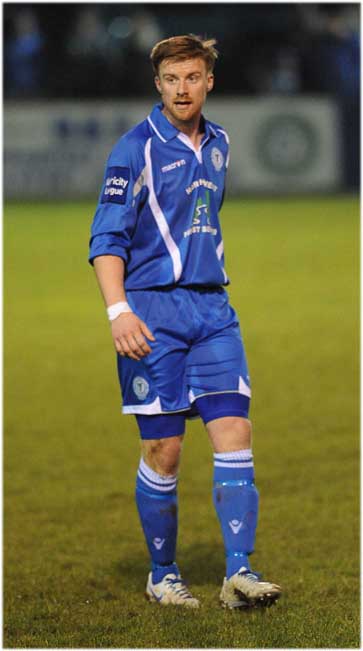 Keith Cowan, is in line to make his 100th appearance for Finn Harps on Friday evening when they take on Wexford Youths at Ferrycarrig Park (kick-off 8.00pm)

Keith Cowan, the towering centre-half from Ramelton, has enjoyed a fine season so far for Harps, and is in line to make his 100th club appearance tomorrow night.

Cowan will become the 62nd player to reach the century milestone for the club. Five of the current squad have also achieved the feat – Kevin McHugh, Michael Funston, Ciaran Coll, Thomas Bonner and Mark Forker – as did James Doherty who left the club last week.

Harps boss Ollie Horgan knows that a tough task lies ahead for Cowan and his team-mates on Friday evening in a venue where Harps have had little success in recent times.

“Wexford are flying at the moment and are lying second in the table,” said Horgan ahead of Friday’s game.

“They could have won in Tallaght on Sunday (against Shamrock Rovers ‘B’) by a lot more that two goals.

“They have power and pace up front with Danny Furlong, Ben Ryan and Aiden Keenan and play very decent football.

“Harps haven’t a great record in Ferrycarraig Park at the best of times so we know how difficult it will be, he said.

Horgan was able to call on the services of Kevin McHugh once again last weekend when the Harps captain played in just his second game of the season when he appeared as a second half substitute in the 1-1 draw with Shelbourne.

McHugh and Tommy Bonner came off the bench and their impact helped ten-man Harps come from behind to grab a share of the spoils.

“The substitutions helped in that the lads brought more energy to our game, but all of them upped their game in last thirty minutes which was encouraging.

“I was disappointed with our performance in the first-half and we lacked energy and bite.

“We seemed tired and didn’t look up for the game even with eleven v eleven on the pitch.

“We didn’t get started till we went a goal down.

“I was obviously pleased with our second half performance having conceded the early goal.

“We were fortunate that we didn’t go two behind but from there on we were committed and showed loads of energy that wasn’t there previously in game.

Once again Harps were reduced to ten men as Josh Mailey was sent off for the second time this season in games against Shelbourne. The red card was the fifth shown to a Harps player in the last eight league games.

“Once again, the sending off was disappointing,” lamented Horgan of Mailey’s 15th minute dismissal.

“It changed the game in the respect that we had to sit deep and let them have the ball but we struggled to get on the ball with eleven versus eleven anyway!

Harps have won on only three of their previous ten visits to Ferrycarrig Park, with the last of these victories coming three years ago when a brace from Blain Curtis helped the visitors to a 2-0 victory.

The other two victories recorded by Harps in Ferrycarrig were during Wexford’s debut season in the league with both games finishing in 1-0 scorelines.

The earlier season meeting between the two sides finished in a 1-1 draw at Finn Park. – Ruairi Keating’s late penalty for Harps cancelled out Killian Cantwell’s opener for Wexford.

Horgan will have to plan without the injured Sean McCarron who has broken his ankle. “We wish him well and hope he has a quick recovery.

“He will be a big loss once again, and he has just recovered by a broken cheekbone.

Caoimhin Bonner remains suspended and will be joined on the banned list by Josh Mailey after his red card last Friday.

COWAN IN LINE TO MAKE 100TH CLUB APPEARANCE AS HARPS TRAVEL TO WEXFORD was last modified: May 29th, 2014 by John2