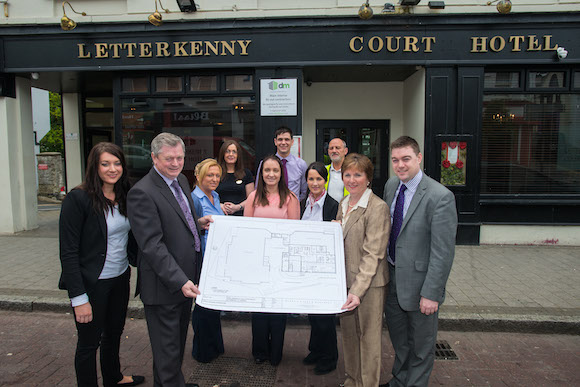 The McKeever Hotel Group has recently bought the Letterkenny Court Hotel and will be adding 27 new jobs as a huge renovation project is underway. The family – Eugene and Catherine McKeever, marketing manager Bridgene McKeever and Group Operations Manager Eddie McKeever along with some of the current staff who will play a key part in the future of the hotel.

Twenty seven new jobs will be created and 30 current positions secured as one of Letterkenny’s hotels undergoes a major €500,000 facelift.

The Letterkenny Court Hotel has been bought by McKeever Hotel Group, which plans a major refurbishment in the coming months.

All 30 staff jobs will be retained and an additional 27 people will also be recruited including a senior post for a general manager.

Work on the €500,000 renovation of the ground floor of the three star hotel has already started. The shop unit next door will be incorporated into the plans which will feature a function area/private dining area for 60-70 people, removing the old staircase and replacing it, the creation of a new entrance leading into the reception area, which will be extended and include a cosy fireplace.

McKeever Hotel Group owns the successful Corr’s Corner just outside Belfast, the Dunsilly Hotel in Antrim and the Adair Arms in Ballymena.

Managing Director Eugene McKeever explained: “When we saw the Letterkenny Court Hotel we just knew it would be perfect as part of our family of hotels. It’s a great location and has huge potential. In September further work will be carried out on the 57 bedrooms and 26 apartments.”

The company says a huge part of its ethos is to develop staff relationships and many of the staff have worked for the McKeever family for more than 20 years.

“The staff at the Letterkenny Court are really excellent and it’s clear that they have a passion for the hotel so we are really delighted to be able to retain all those jobs and to be adding to them as renovation work finishes,” Mr McKeever said.

Eugene and his wife Catherine know the hotel business inside out. Eugene actually started in hospitality in 1966 when he was just 12 and began work in Corr’s Corner roadhouse in the bar before training as a chef.

He was head chef for 11 years but decided he wanted to start his own business. In 1986 Eugene and wife Catherine opened their first restaurant – Granagh House – in Randalstown. Eugene was the chef and Catherine, who worked full time as a teacher, worked front of house at night. The family lived over the restaurant and staff remember the children coming down to help out and join in.

In 1993 he bought Corr’s Corner when his boss and friend John Corr decided to retire. He immediately built on 30 bedrooms with a further 36 bedrooms added in 2006. The company quickly grew as he built the Dunsilly Hotel in Antrim in 2005 and in 2010 bought the Adair Arms Hotel in Ballymena, which required significant renovation work.

Two of the couple’s children have also joined the family business with Bridgene taking up the role of marketing manager and Eddie as group operation manager.

The move to Letterkenny was a natural choice as Catherine’s father John Friel hails from the town and she has dozens of cousins in Donegal!!!

“Everyone has made us feel so at home and they’ve been really kind and supportive. It’s important for us to be part of the community and to understand what people want and need in Letterkenny,” Catherine McKeever said.