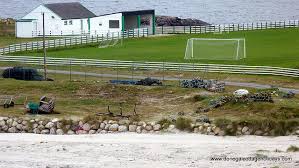 The annual Arranmore Challenge cup takes place this Bank Holiday weekend, and as always a huge influx of players from England, Scotland and other parts of Ireland are expected to descend on the scenic Island, for a feast of football.

The competition continues to grow in popularity every year, and this year another massive crowd is expected to embark on the island for another action packed weekend.

Scottish outfit and defending champions Real Lypis enter the competition as bullish as ever.

Manager Bernie Lenty has expressed his confidence that his side can retain the competition, but the experienced manager knows they’re are plenty of sides capable of knocking his side off his perch.

Damo’s dream, the side Lypis defeated in the final last year, are desperate to regain the competition they surrendered in dramatic circumstances last year.

Having won the competition in 2011 and 2012, Damo’s dream were going for three-in-a-row, but there dreams were dashed by a Terence Shiels inspired Lypis side in the final.

They’re gunning for revenge, and are expected to bring a strong outfit, which will contain several well-noted Ulster Senior League players.

Damo’s Dream and Real Lypis will again be expected to advance to the latter stages of the competition, but there are plenty of other top-class sides capable of winning this prestigious competition.

Dublin based outfit St.Annes Utd enter the competition for the first time, but are expected to a formidable side, while Balally Celtic another Dublin based side have shown they’re capable of sustaining a challenge.

Gallagher’s Tunneling, Stonecutters, Clannad, Internazionale, Arranmore and FC Palatico are also expected to make a strong challenge for the competition.

Early told Donegal Daily, “The competition doesn’t get the recognition it deserves, I don’t think people realise how good the quality is until they actually attend the competition.

“The standard of players on show is absolutely top-class, Real Lypis who won the competition last year, had players on the books of Clyde FC, so that’s just an indication of the quality.

“In every side there is at least two or three players who have played at a senior level, and it’s great that those players come back to the island every year to play in it.

“They hold it in high esteem, and I would encourage anyone interested in football to come and watch the competition, they won’t be disappointed.

Early said the economic benefit the competition brings to the island, is crucial.

“The competition brings the diaspora forced to emigrate back home, it’s a fantastic weekend, and there is a great feeling on the island.

“It’s great to see the locals return, and obviously the size of the competitions attracts teams from all over England, Scotland and other regions in Ireland.

“That obviously has a positive knock on effect for us as publicans, and for those running hostels and B&B’s.

“As well as the football on offer, many come for the entertainment and craic at night, on and off the pitch, it’s a great weekend, and that’s why every year the competition gets bigger.

Early, is well-known throughout soccer circles in Donegal, having had a distinguished career as a player and manager of Arranmore Island.

Early managed Arranmore this season, and led them to the Glencar Inn Division Two title.

He believes Arranmore can compete with some of the top sides in this year’s Arranmore Challenge Cup.

“They’re a great bunch of lads, and what they achieved this year was fantastic, they’ll give it a rattle, and they’ll be hard to beat.

“It’s going to be interesting, but it’s a very, very tough competition, you need that mix of quality and a little bit of luck, hopefully it shines on the boys from the island.

First game kicks off at 11.30 am on Saturday, when defending champions Real Lypis play Tory Celtic.

TAKE ME TO THE ISLAND – ARRANMORE PREPARING ITSELF FOR A FESTIVAL OF FOOTBALL was last modified: May 30th, 2014 by John2