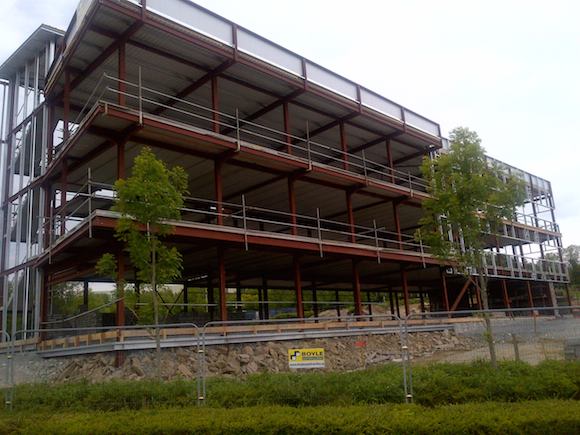 Private investors are building this office development in Letterkenny

MAYBE they know something we don’t – but private investors are behind a series of projects which point to new jobs for County Donegal.

Pictured above is a new three-storey building at the Business Park in Letterkenny.

But it’s not government money going into the development; it has been funded privately.

However it’s not the only project which private investors are turning to.

An Antrim-based company last night announced it had bought the Letterkenny Court Hotel, securing 30 jobs with 27 new ones still to come.

And we have also learned that private investors are hovering around several other projects – both office developments and tourism sector businesses.

The positive signs come as Deputy Joe McHugh confirmed he is meeting the head of the IDA next week in an effort to bring new technology jobs to Donegal.

Deputy Joe McHugh “We have to acknowledge the vast numbers of talented young people who have left this country and our challenge is and has been to create the environment to bring them home. We need to ensure that the potential in existing facilities in rural areas and towns, like Letterkenny, is fully developed and built on. Awareness will be a key factor in doing this.

“There have been almost 700 additional jobs created by the IDA supported companies in Co Donegal since 2011 and we need to build on this in places like the IDA business park in Letterkenny. Along with Athlone and Waterford, Letterkenny has been identified as having the potential for further growth and expansion.

“The private sector in Letterkenny has confidence in future growth in the area and private companies have invested in the construction of a modern building to attract high value and high tech companies to the town which is both welcome and also a positive commitment to the future of Letterkenny.

“I have arranged a meeting with Frank Ryan, Chairman of IDA to discuss the ever-growing need for attracting new industry to the County. This is following the recent meeting by the Minister for Jobs and Enterprise, Richard Bruton TD, to see first hand the development and progress of existing FDI companies, like Zeus, who are currently investing over €10 million in further expansion and with the creation of over 100 jobs.

“During this week’s Parliamentary Party meeting, I called on the Cabinet to include a focus on rural development in the SME sector as we are all aware that much of the job creation throughout the country is city led. While there is always a high demand for job creation in cities, with larger populations and infrastructure in place, there needs to be a separate focus on creating and building on existing foundations in rural Ireland.

“The North West Science Park investment by the Government of €4 million, which is part of a cross border project, and the announcement of 60 jobs is very welcome and positive. It also highlights the potential that is in place and I intend to exhaust the potential in Donegal to ensure this momentum is both followed through and built on.”