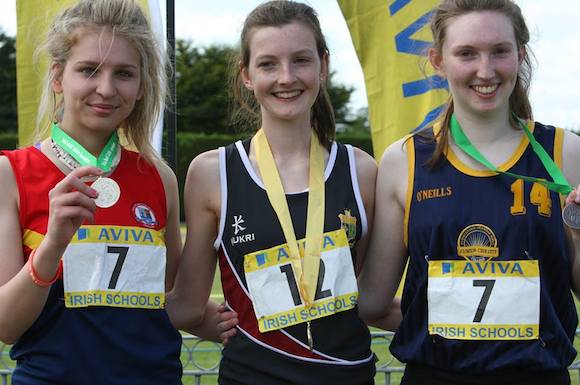 By Patsy McGonagle: Well it was one of those special day the Irish schools athletics finals at Tullamore; the sun was shining, there were many many qualifiers from earlier Ulster qualification and the excitement and nature of the competition was always going to provide a serious test to the adequacy of Donegal athletics at this point.

Well to get straight to the point it came in somewhere in the area of B + in terms of medals won ,diversity of disciplines engaged in and performance .

The best day ever overall really so the curve is rising . The acheivers were by school St Columbas , Stranorlar, Blaithnaid Patton, triple jump gold 11. 27 having being earlier dissappointed with her high jump . Ian Brennan a bronze , pb in triple jump 12.93 how neat it would be if he could climb beyond 13m this season .,Jade Leeper discus bronze 33.06and Janine Boyle silver long 5-24m and beat simply on the dip in 100m as photofinish indicated it was that close . Brendan o Donnell ,St Eunans early in the day got the hammer out to 53m + to win easily and late afternoon was only centimetres off a discus gold 44m odd . Finn Valley College athlete Naoimh Mc Granaghan bronze in the javelin and Sommer Lecky a gold at 1.63 in the high for her school Strabane Academy ,she competes out off Fvac, and indeed jumped similar to 3rd in long but squeezed out on countback. Abbet Voc School had Kate Mc Gowan with a pb 400m hurdles 62.32 to win and for good measure her friend Kelly Mc Grory 3rd and they formed part of the senior girls relay bronze team add in a silver for Katie Hoad in the pole vault.

Gairmscoil Cu Uladh Aaron Mc Glynn ran an absolute blinder a mature race to win impressively over 800m his time 2.0.78 just outside the schools record and i repeat just that record held by Galway man Paul O Donovan at 2.00.0 from way back in 1978 .

The Kelly lads from the Royal and Prior first up Leaving Cert student John 17.27m in the shot an easy victory BUT he was chasing Victor Costello s outstanding record of 17.93m set 1990 and he fell short and such is the heights indeed distances he pushs towards he was disappointed then brother James in round 4 got out to 14.06 m in junior boys shot to edge the title a rare occurence two brothers in gold on Schools day.

Finally from Killybegs V S Dylan Kearns stepped up to the mark with a 43m odd javelin to claim silver . A strong medal tally all round the influence of dedicated coaching in the clubs and the support of certain schools combined to bring this positive day to a conclusion . One can’t but remark on the none-engagement of many schools throughourt the area at Ulster schools level and therein possibly is the key to bringing that B+ to an A + in the years ahead as the sport continues to develop.