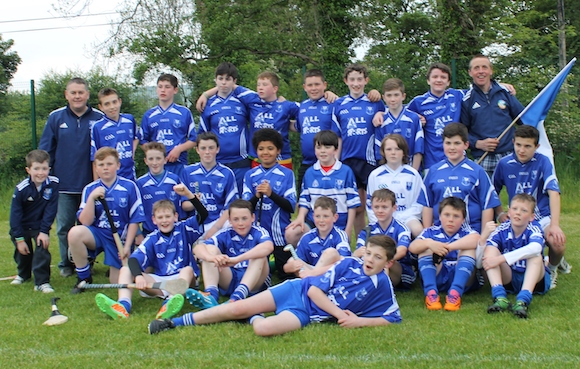 The Four Masters Under 14 hurling squad secured the first silverware for the club this year by defeating a very strong Setanta side by 4 points on Thursday 29th May at the Centre of Excellence in Convoy.

This is the first hurling title won by the Four Masters since 2000. It concluded a fantastic run by the squad throughout the league as they remained unbeaten throughout.

Mark Sweeney, Manager of the squad, commented, “we are absolutely delighted with the players, when they went 1-4 down in the first 10 minutes they didn’t panic and showed great character and determination and belief in their abilities and ended the half 4 points up. It really was a nail biting finish and a very hard fought game. I wish to say a big thank you to all the travelling supporters who were there to support the team. The manager and mentors were very impressed with the teams performance throughout the league campaign and are now looking forward to the Championship”.

The Under 14 squad has also been entered in the Feile na nGale 2014 which is being hosted by Ulster GAA on 20th to 22nd June. The team will be playing the Wolf Tones team from Edwardstown, Co. Longford, the St Enda’s, team from Omagh Co Tyrone, and the Barrow Rangers from Kilkenny in the qualifying rounds with the finals scheduled to be played in Omagh and Garvaghy on Sunday 22nd June.