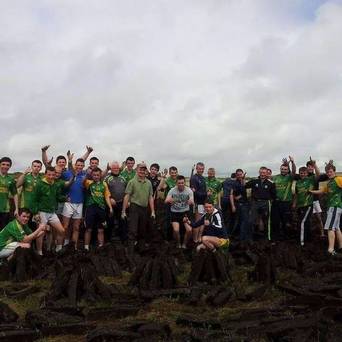 Naomh Columba CLG have earned national praise, for their wonderful act of kindness, when they stopped their bus and helped a man turn his turf, on their way back from a match at the All-Ireland Gaeltacht finals this weekend.

Naomh Columba were returning from the beach, where they went to soak their legs after a tough match in which they won against Laochra Loch Laoi.

On their way back, they spotted the man turning turf on his own, with the weather being extremely hot the men from Glencolmcille acutely aware of the difficulty in turning turf, decided to hop off the bus and give him a hand.

It was a wonderful gesture from the team, and the man named as Tomas couldn’t believe his luck, a job that would have taken him half a day was finished in a hour.

Unfortunately Naomh Columba bowed out of the competition the next day, at the hands of the powerful Moindearg from London.


Despite the disappointment on the pitch, Naomh Columba have earned praise throughout the country for their kindness.

DONEGAL CLUB SIDE GO TO ‘THE BOG’ FOR STRENGTH AND CONDITIONING TRAINING was last modified: June 3rd, 2014 by John2