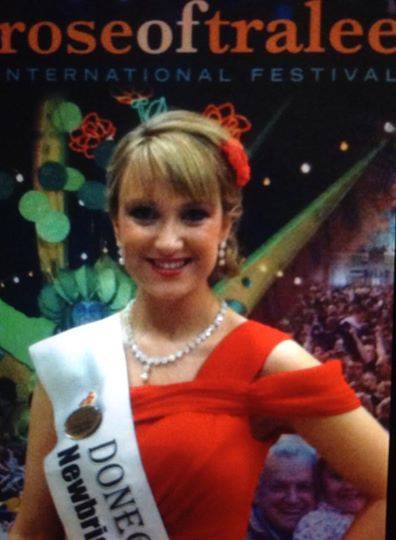 Donegal Rose Tamara Payne has made it though the Regional Festival of the Rose of Tralee competition.

She was named as the Ulster Rose on Friday, following the third Regional Festival Selection night in Portlaoise.

Around sixty Roses attended the Regional Final Festival that took place over the last week. Twenty three Roses were chosen to go forward to take part in the International Rose of Tralee Festival in Tralee. The festival will run from August 15-19.

Tamara was interviewed by host Dáithí Ó Sé. Donegal was well-represented on Friday night – singer Mickey Harte entertained the crowd as the judges made their final decisions.

Tamara (19) is studying Law at the Letterkenny Institute of Technology. She also works in the Nesbitt Arms Hotel in her hometown of Ardara. She is the daughter of Anna and William Payne of Garrowart.

Supporters and well-wishers welcomed her home to Ardara last night. Tamara has enjoyed attending community events around the country since being crowned as this year’s Donegal Rose.

Tamara was sponsored by Naomi’s Hair Salon Ardara. Her selection night dress was gifted to her by Andrew, manager at The Nesbitt Arms Hotel, and his wife Ashling.