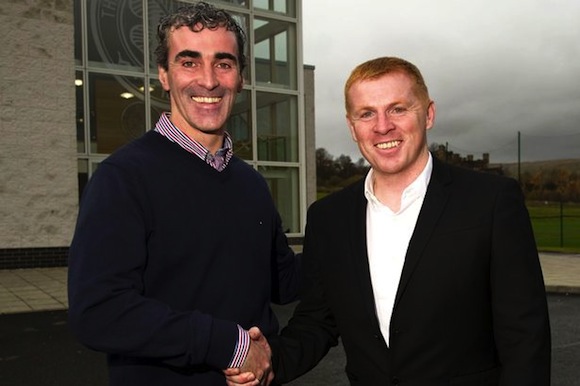 Jim McGuinness has said he will miss Neil Lennon following his departure from Celtic Park.

McGuinness was appointed as a performance consultant at the Glasgow giants in November 2012, after majority shareholder Dermot Desmond recommended him to Lennon.

Lennon has since parted company with the Scottish champions last month, saying it was time for a new chapter in his managerial career.

McGuinness is keeping a close eye on developments at Celtic Park, but he paid tribute to Lennon for giving him his chance at the club.

“There is a lot of stirring and movement at the club.

“I must say that Neil was excellent with myself. He was someone I had a good relationship with, chatting about Gaelic football on a Monday morning was great and it was good for me.

“I’m sure whoever the candidate is, the calibre of people they’re talking about being in the frame are all top quality managers, and would bring a lot to the position.

“For giving me the opportunity first and foremost, I have to be very thankful for that.

With Roy Keane ruling himself out of the job, it is expected the Celtic board will choose between former West Brom manager Steve Clarke or former Cardiff City manager Malky Mackay.

McGuinness hopes to stay with Celtic but expects his role to change once they bring in their new manager.

“I hope I will (stay), yes, but with change there always will be change, so we will see what it brings.

“Whatever person comes in now, hopefully I will do my best regardless.

For the time being McGuinness will focus his attentions on the Ulster SFC semi-final between Donegal and Antrim.

Antrim defeated Fermanagh in a thrilling encounter at Brewster park last weekend and McGuinness knows the semi-final will be a difficult clash for his Donegal side.