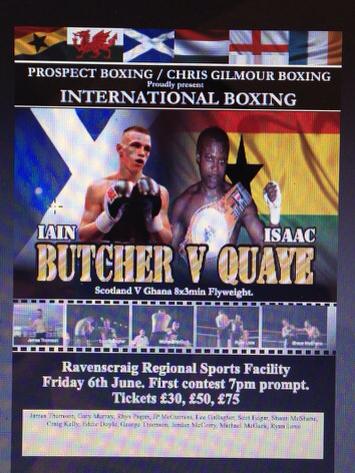 Rosses boxer Shaun Mc Shane will be hoping he can get back to winning ways tomorrow night in his clash with English fighter John Green at the Ravenscraig Regional Sports Facility.

Mc Shane steps back into the ring for the first time since his narrow defeat to Polish fighter Marek Laskowski.

Mc Shane was left frustrated by the tactics of his Polish opponent and was defeated narrowly on points.

In what was only his second professional fight, Mc Shane has insisted he learned a lot from his last bout with the experienced Laskowski, and is confident he can defeat the unbeaten Newcastle-based fighter John Green.

Mc Shane told Donegal Daily, “I’ve been training for the last five weeks for this fight, but with work commitments I’ve been finding it hard to give it 100%.

“It’s not ideal, and I’m the type of person that likes to give everything 100% but I’m been unable to focus solely on the fight because of work.

“It’s hard to get time to do everything, but you just have to do your best and hope it works out OK.

Mc Shane has plenty of knowledge about his next opponent, but has admitted it’ll be a tricky fight, and that he’ll have to be at his best to succeed.

Shaun McShane pictured with a few of his fans that travelled to Glasgow from Donegal to witness him win his first professional fight against Ryan Love.

“I’m boxing a guy from England, and being a proud Irishman, I’ll need no motivation to fight someone from England.

“I no all about him,  he’s a southpaw which is always awkward to fight against, but I’ve dropped down to lightweight for this fight which would be my natural weight.

“In my two previous fights, I’ve been operating at light-welterweight and the last fighter was a welterweight.

“It’s too much to be giving away, so I’m confident fighting at my naturally weight that I get the job done.

Mc Shane says the hard work is done now, and it’s all about getting his head right mentally for what will be a difficult fight on Friday night.

“The work is done now, we’ll have a few easy sessions this week just to keep weight right and we’ll see how it goes on the night, I’m looking forward to it and I’m confident.

Mc Shane says he will take a break after this bout, as he needs to get key-hole surgery on his knees.

“I’ll be looking forward to a break after this because I’ve been training pretty much non-stop since the new year, and I need key-hole surgery on my knee because it’s causing a few problems.

“So hopefully, I can get a good victory now on Friday night, and have a wee break.

Mc Shane thanked all his supporters who have travelled to his fights from Donegal, and the Irish Diaspora living in Glasgow for their support.

“Thanks to everyone who has been following me so far on Facebook, and for all the updates and messages of good luck on my page, it’s much appreciated.