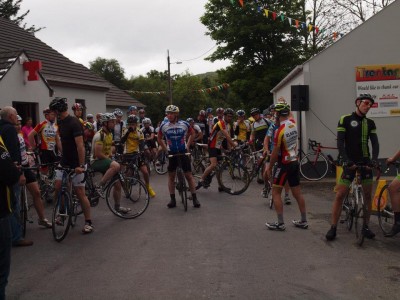 Trentagh was the setting for the annual cycle race as part of the Trentagh fun Weekend, Cyclists from all over the county took part in the 20 mile Cycle race.

Kevin is just back from injury and had a broken rib which was sustained from an accident in the Donegal Cycling Championships a few weeks ago.

A very good performance from Errigals Damien Holian took him to 3rd place.

The chasing group had a tight sprint of their own and Strabane/Lifford club man Warren Blackburn just took the sprint over Errigals Eugene mc Gettigan 5th.

In the B race, a first win for young Errigal cc man Paul Doherty, closely followed by Gareth Bonnar 2nd FM, and another Holian, Seani in 3rd.

The Novice race attracted the largest number of competitors, another First win was achieved by young local lad Adam Rankin of Errigal CC, at his young years there is surely a lot more to come from this young Lad.

He was followed in by Martin Jordan of Four Masters cc 2nd , and Garreth Kerrigan Milford AC taking 3rd, the over 40 was won by Brian Kelly FM, and a special Novelty Prize was given to John & Eileen Mc Loughlin for completing the race on a Tandem bicycle.

A big thanks to the well organised Marshals on the race coarse and top marks to the ladies in Harleys for the excellent food afterwards.