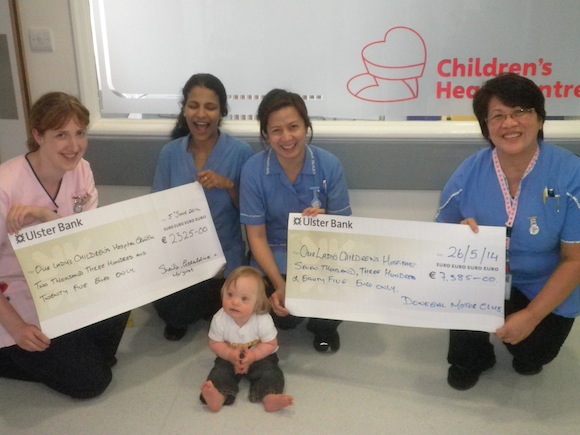 Sean with staff of Our Lady’s Hospital For Sick Children in Crumlin.

Little Sean McMenamin and his family have said a huge thank you to the staff of Our Ladys Hospital for sick Children in Crumlin.

The Letterkenny lad spent much of his early life at the Dublin hospital undergoing various operations for a heart condition.

The McMenamin family decided they wanted to in some way do something in return for the amazing treatment and kindness shown to Sean.

Sean’s mum Sheila and her sisters Margaret and Geraldine competed in the ladies mini marathon in Dublin and raised €2,325.

This was followed by a karting night and grand display of various motorsport and classic cars in association with the Donegal Motor Club and John Dolan which added another €7,385 to the kitty.

Sean’s family have said they are so thankful to everyone who helped them in any way to raise the money which has ben donate dot the hospital.