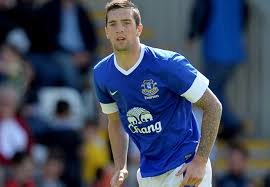 Everton star Shane Duffy has been handed his full international debut by Martin O’Neil for the clash with Costa Rica tonight.

Everton star Shane Duffy, who has close Letterkenny connections, made his full international debut for the Republic Of Ireland tonight against Costa Rica.

His father Brian who hails from Ard O’Donnell, Letterkenny, will be beaming with pride tonight as his son makes his full international debut under the watchful eye of Martin O’Neill and Roy Keane.

Duffy had been on the fringes of the Irish set-up during the Trappattoni era, and was named in a number of squads, but never made his full debut during the Italians spell as manager.

Duffy, who is from Derry had represented Northern Ireland at underage level, but switched allegiances to the Republic of Ireland when they showed an interest in capping him at U19 level in 2010.