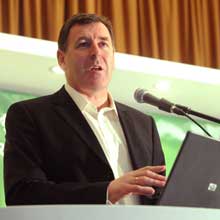 PACKIE REVEALS HIS FAMILY’S CANCER BATTLE DRIVES HIM ON

Packie Bonner has revealed how his own family’s battle with cancer has driven him to meet the disease head-on.

The big Keadue man revealed that two of his sisters have been struck down with the disease.

“I’ve had two sisters affected, one had breast cancer, one had ovarian cancer and both of them, thank God, are over it and are doing okay.

“Cathy, one of my sisters, had cancer in her neck when she was a young girl and later had breast cancer – she went through chemotherapy and she’s over it.

“Being around people with cancer is pretty harrowing and you need to help people out.

“I’m delighted to be part of promoting this and getting it out there,” he said.

Packie said he is particularly delighted that the book is aimed at helping men recognise the dangers signs of prostrate cancer.

“We’re trying to promote that men come out and speak to each other about it, that is embedded in the book.