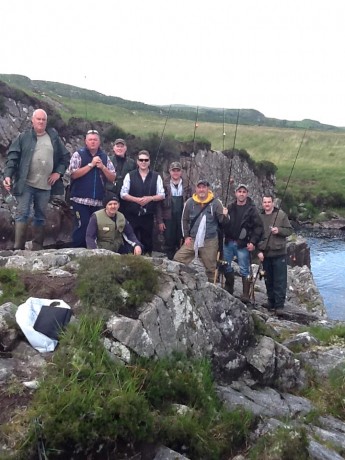 ANGLER TREATED IN HOSPITAL AFTER STAND-OFF WITH BAILIFFS AND GARDAÍ

AN angler was treated in hospital and a number of others left seething after bailiffs attempted to seize their rods and nets.

Anglers on the Gweebarra River have been involved in an ongoing legal dispute with Inland Fisheries Ireland over €50-a-day licenses. The anglers claim the fees are illegal.

Donegal Game Anglers Federation spokesman Noel Carr said the bailiffs were accompanied by Gardaí and said video was taken by some of the bailiffs just after noon on Sunday.

“Ever since the attempted eviction of the local anglers on the Gweebarra River was resisted in a campaign started in 2006, the long running dispute for angling rights was escalated on Sunday as fishery board staff used force against anglers with An Garda Siochana having to intervene to protect one angler who alleges he was in danger,” said Mr Carr.

“In what was supposed to be the usual peaceful Sunday morning’s fishing on their local Gweebarra river, was turned into turmoil by the very heavy handed intervention of fishery board staff.”

Members of the Rosses Anglers and Fintown Anglers Associations spotted two fishery board jeeps and one car patrolling the road around the Mayo Pool fishery and anglers observed the IFI staff watching them through binoculars and recording equipment from a distance.

“Fishery officers approached several anglers and asked for current angling licenses, which they all had in order and showed to the officers in compliance with the law,” said Mr Carr.

“They were then asked for the €50 per day IFI permits of which no supporting DGAF or club angler had purchased as they explained that this issue was in legal dispute in the courts.

“The IFI staff exchanged comments with the anglers and proceeded to attempt to take their rods and equipment.

“They tried to forcefully seize several rods, reels, landing nets and salmon which were legally tagged and in compliance with the fishery laws.

“One angler was taken to Letterkenny General Hospital with a suspected dislocated shoulder.”

He added: “Following a review of this most disturbing incident, the DGAF will issue formal complaints through their legal representatives in the coming days.

“However, the Executive Committee of the Donegal Game Anglers Association with the full support of a national federations TAFI and FISSTA representing over 60,000 anglers nationally, express their determination to continue to exercise their rights to fish more than ever and are looking forward to the next outing to fish our river again.”

No-one from An Garda Siochana was available for comment.

ANGLER TREATED IN HOSPITAL AFTER STAND-OFF WITH BAILIFFS AND GARDAÍ was last modified: June 9th, 2014 by John2