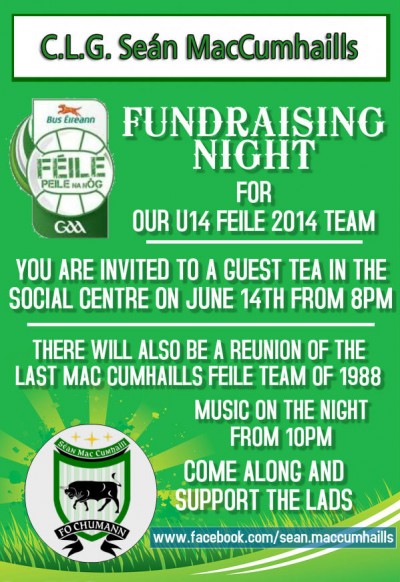 GUEST TEA.
As you all know, the Under 14 team will represent Donegal at this years All Ireland Feile Competition. This is a huge honour and a just reward for the these lads. They are a committed and hard working bunch of young men. We are having a fundraiser this Saturday night for the team. Its a Guest Tea, followed by a reunion of the last Mac Cumhaills team, 1988, to represent Donegal in the Football Feile. This will be a great nights craic, and there will be music etc as well. Doors open at 8.00pm with music from 10.00pm.

FAMILY FORTUNES.
The Grand Final of Family Fortunes was held in the club last Saturday night. We had 8 teams battle it out to see who won be crowned victorious. The final was an exciting affair between Alice Bonner’s team and Bishops Choir, lead by Pj Mc Ardle. The experience of World Champion Jason Quigley just shaded the final round for Andies to emerge as the champions. It was a brilliant nights craic. well done to all.

UNDER 14
Well done to the Under 14 footballers who traveled to Ardara to take part in the Tomas Maguire Memorial Cup. The lads made it through to the Final were they took on Naomh Conaill. After another fine display they ran out comfortable winners. Well done lads. Many thanks to Ardara Gaa for the invitation to take part.
RESULTS
Senior Football.
St Nauls 2-08 Mac Cumhaills 3-15
Reserve Football
St Nauls 2-08 Mac Cumhaills 4-13
Third Team.
Mac Cumhaills 4-02 Pettigoe 0-08
A good weekend for all the adult teams. Impressive displays from Marty O Reilly and David White in their respective matches. Well done lads.

FIXTURES
Senior/ Reserve Football.
Home to Glenfin Sunday 15th June 1.30/ 3.00 pm throw in.
Third Team.
Away to Glenswilly Sat 14th 7.30pm throw in.
UNDER 10 FOOTBALL
Well done to all the Under 10’s who played at the weekend. We had 4 teams out again. The Green teams traveled to Castlefin for their matches were they had good wins against Robert Emmetts and St Marys Convoy. The White team made the trip to Buncrana were they played in atrocious weather. They had good results against Glenswilly, Buncrana and Red Hughes. Many thanks to Robert Emmetts and Buncrana for the games and food afterwards.
BINGO
The Bingo is on in the Villa Rose hotel this week. All very welcome.