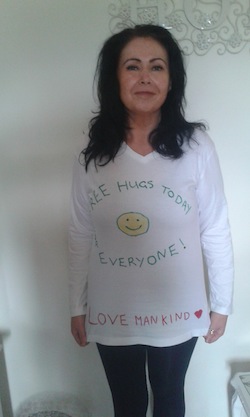 A FEEL-GOOD STORY! THE DONEGAL WOMAN OFFERING FREE HUGS TO MAKE A DIFFERENCE

A Donegal woman who lost a close friend recently is to spend a day hugging complete strangers outside a local post office.

Juliette in her special ‘huggable’ t-shirt gets ready for Friday!

Happy-go-lucky Juliette Emery, 44, will spend Friday outside Buncrana Post Office offering hugs to anyone who wants one.

Ms Emery said she doesn’t want to raise money from the plan but just wants to make other people feel loved.

She has had special t-shirts designed for the day and is now being joined by two friends who also plan to give out free hugs.

“I lost a good friend recently and I thought how we want to hug people but we often don’t.

“I’m planning to hug as many people as I can or want to be hugged on Friday.

“I would welcome anyone else who wants to come along but they have to hug anyone who wants to be hugged – even if they might have fallen out with them or don’t particularly like that person.”

Juliette’s daughter Mia has designed special t-shirts for the day which Juliette and her two friends Claire McLaughlin and Amanda Murphy will wear.

The ladies plan to start the ‘Hugathon’ at 10am and will stop when everyone who wants a hug has received one!

Juliette revealed she has received amazing support for her madcap plan from friends around the world in Portugal, Spain and even Australia.

She admits that there has been some negative reaction but she has chosen to ignore it.

“Some people have said that others might not want to be hugged and that’s fine. I’m not forcing anyone to hug me.

“But there are people out there who have not been hugged for years and I hope they come along on Friday to get a hug.

“If I can put a smile on one person’s face then it will have been worthwhile,” she said.