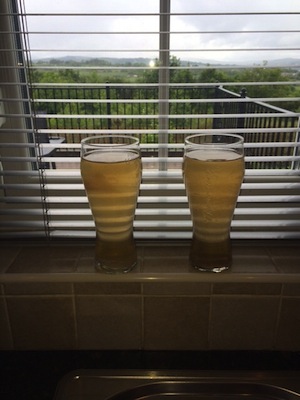 This is the water a young Ballybofey family have been forced to drink and bath in.

The water which the Wilsons are expected to drink.

Stephen Wilson, his wife and their four young children, say they are just sick of being treated like second-class citizens.

Despite complaining to Donegal County Council on four occasions, the Wilsons say they have never even received a phonecall in return.

Mr Wilson, who lives in Carn just outside the Twins Towns, told Donegal Daily “It’s just a joke at this stage. How are people expected to drink and wash with this water?

“We have a four month old baby and this is the water coming through our taps.

“What I am even more annoyed about is that we are being ignored by Donegal County Council.

“I have made four complaints online and I have not received even one phonecall to say that they are even looking into it.”

Stephen says the water becomes discoloured when the pressure supply gets low which is usually in the winter months.

But this morning he woke to find the water dirty brown once more.

“How can children wash their teeth before school or even have a cup of tea with this water?

“I know other places ac ross Donegal have similar problems but absolutely nothing is being done about it.

“We are being left completely in the dark and that is the hardest thing to take,” he fumed.