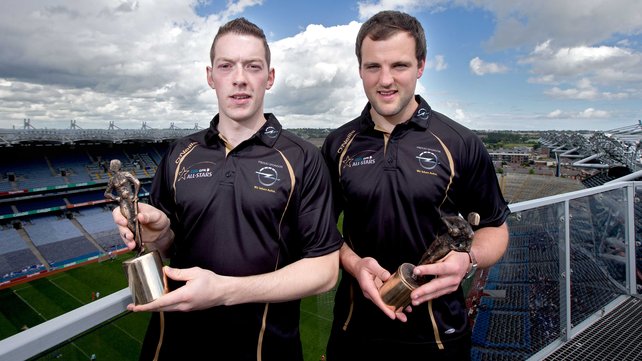 Donegal captain Michael Murphy has been named the GAA/GPA player of the month for May.

Michael Murphy pictured with Stephen Maher (Laois), as they picked up their player of the month awards in Football and Hurling at Croke Park today.

Murphy produced a man-of-the-match display for Donegal in their Ulster SFC quarter final win over Derry.

He was instrumental throughout that encounter, and scored a sensational point from a sideline kick, that drew comparisons with the famous point scored by Maurice Fitzgerald for Kerry against Dublin in 2001.

GAA President Liam Ó Néill said, “The onset of our championships brings with it stellar performances and our two winners this month certainly contributed to the bright start we’ve had to both the football and hurling championships.

“Michael Murphy has long been a leader for Donegal, despite his relative youth, and his latest offering against Derry was in keeping with his leadership qualities.

Murphy and his Donegal team-mates are currently preparing for an Ulster semi-final clash with Antrim in Clones a week on Sunday.