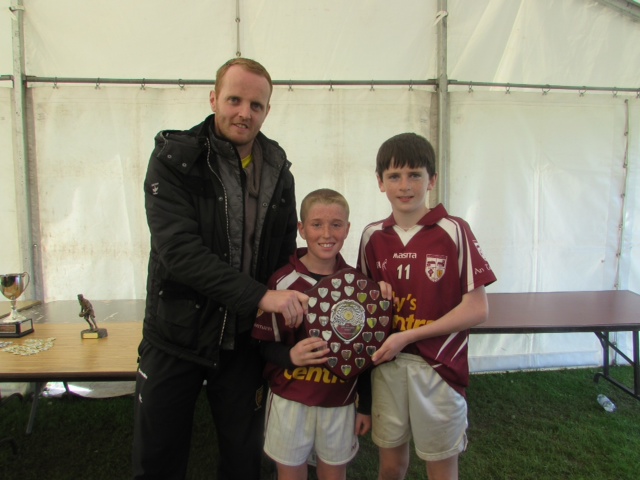 Termon U12’s travelled with two teams to Newry for the biggest underage football tournament in Ireland on Sat 7th June.

They were the first team from Donegal to win honours at this prestigious tournament and brought home the John McAleavey Shield.

In the qualifying stages they beat the mighty Clonoe from Tyrone , Cooley Kickhams from Louth and Sallins from Kildare before losing out to a very strong Lavey team in the final group game.

They went on to defeat Cavan Gaels in the quarter finals, Bailieborough Shamrocks in the semi final before edging out Ballyhugh from Cavan after a titanic struggle in the final (after extra time).
The second team played St Pauls from Laois, and our own Robert Emmets & Dungloe rivals from Donegal and again performed very strongly.

Both sets of players played magnificent football, and showed the determination and skill required to compete at the very highest level.

We were complimented on the performances of our team as a unit and are proud to report that Aaron Reid was nominated and shortlisted for the award of player of the tournament.

Despite the ultimate accolade going to Enda Downey from Derry this nomination was the equivalent of a youth all-star award, and speaks volumes about his performances on the day.

Among a team of stars, others to stand out were Martin Steele , Bobby Mc Gettigan and Stephen Black.

On the second team Michael Trearty ,Caolan Dolan and Lorcan Callaghan were exceptional, but team coach Paddy Gallagher was most proud of the way both teams performed as a unit and played for each other.

We topped the day off with some ice cream in the sunshine, then stopped for a well earned meal in Kelly’s on the way home before bringing the trophy back to the Lagoon where we were greeted by supporters, parents and a bonfire.

Not only did we have a great day out, but the behaviour of all the players both on and off the pitch was exemplary and a credit to their parents, coaches and club.

We hope the players continue to develop and enjoy their football & have no doubt they will have many more big days out.