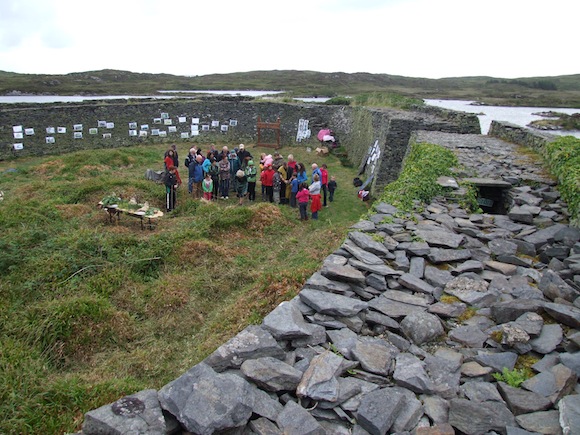 People attending the ‘Heritage Week’ event at Doon Fort, Loughadoon in August 2013. Archaeologist Paula Harvey will be speaking about the significance of Doon Fort at the free archaeological heritage seminar in the Regional Cultural Centre, Letterkenny on Saturday, June 14.

Donegal’s heritage and its protection will be the subject of a unique free seminar this weekend.

The seminar on the archaeological heritage of County Donegal in the Regional Cultural Centre, Port Road, Letterkenny on Saturday, June 14 from 9 a.m. to 2 p.m.

The archaeological heritage of County Donegal gives us an insight into past societies and ways-of-life, explained Joseph Gallagher, Donegal County Council’s Heritage Officer.

“Our archaeological heritage also provides part of the fabric of our cultural landscapes and helps to tell the story of our county.

“Aspects of our archaeological heritage have been lost in recent years whether through lack of awareness, neglect, destruction, insensitive development, landscape change, weathering or erosion.

“All efforts to conserve our archaeological heritage must be mindful of our obligations under the National Monuments Acts and follow the principles of best conservation practice.

Most of the 3,400 known archaeological monuments in County Donegal on the Record of Monuments & Places protected under the National Monuments Acts (1930-2004) are in private ownership.

The event is aimed at landowners, heritage groups, historical societies, community groups, ‘Tidy Towns’ committees, farmers, archaeologists, planners, engineers, architects, local authority staff and anyone who has an interest in our archaeological heritage.

Guest speakers at the free seminar will include:

• Connie Kelleher, Underwater Archaeology Unit, National Monuments Service, Department of Arts, Heritage & the Gaeltacht who will give a presentation on the underwater archaeology (such as shipwrecks) off the County Donegal coast and how best to protect and manage our underwater cultural heritage;

There will be short accounts of archaeological heritage initiatives by local community groups interspersed with the main presentations including Paula Harvey on Doon Fort, Bríd Ward on the Franciscan Friary in Ballysaggart and Marius Ó hEarcáin & Patricia Stratford on Carrickabraghy Castle in Inishowen.

The free seminar will conclude with an open questions-and-answers session with the guest speakers. The seminar is an action of the County Donegal Heritage Plan and is funded by Donegal County Council and The Heritage Council.

The seminar is free and open to everyone but places are limited so early booking is advised. If you would like to book a place at the ‘Lost & Found’ seminar, contact the Donegal County Museum on (074) 912 4613 or by e-mail at: museum@donegalcoco.ie

People attending the ‘Heritage Week’ event at Doon Fort, Loughadoon in August 2013. Archaeologist Paula Harvey will be speaking about the significance of Doon Fort at the free archaeological heritage seminar in the Regional Cultural Centre, Letterkenny on Saturday, June 14.

The fifteenth-century Franciscan Friary at Ballysaggart that is undergoing restoration through an initiative led by a local community group with support from The Heritage Council. The Franciscan Friary is a Recorded Monument protected under the National Monuments Acts.

The Donegal County Museum is a designated museum which means that it is legally entitled to retain objects on behalf of the State under the National Cultural Institutions Act (1997) and the National Monuments (Amendment) Act 1994.

Grianan of Aileach is a National Monument in the care of the Office of Public Works however most of the 3,400 known archaeological monuments in County Donegal on the Record of Monuments & Places protected under the National Monuments Acts (1930-2004) are in private ownership.