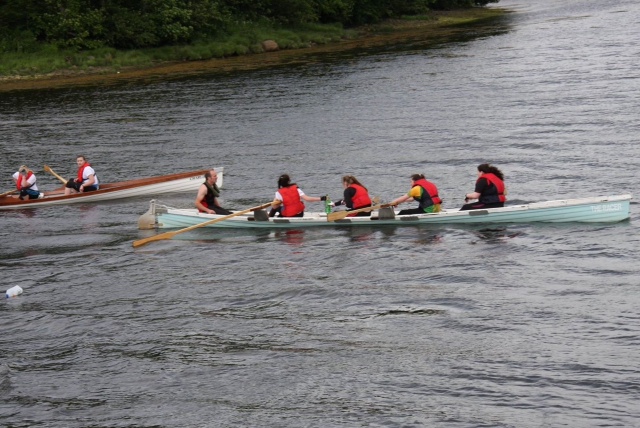 PICTURE SPECIAL: SKIFF ROWING IN DONEGAL CONTINUES TO GO FROM STRENGTH TO STRENGTH

Rowing in Donegal has gone from strength to strength in recent years. Skiff Rowing was extremely popular around the Donegal coastline in the 70’s to the mid-80’s and then went into decline from the mid 80’s onwards.

A number of years ago a few clubs revived the sport and then the season of 2013 saw a major increase in participation.

So much so that a Donegal Coastal Rowing Association was formed to coordinate events and activities and to assist in bringing Donegal Rowing onto a national platform through the Irish Coastal Rowing Federation.

The 2014 season kicked off on Sunday the 1st of June at Fintown Lake with 41 teams competing over 11 categories.

This regatta was organised by the Donegal Coastal Rowing Association to start the season. Subsequent regattas are then organised by each of the clubs in turn.

Sunday the 8th of June saw the first of the club regattas hosted in Donegal Town, organised by Donegal Bay Rowing Club.

This Regatta saw 49 teams (245 competitors) participate across 10 categories from under 14 through to Senior Ladies and Senior Men.

Since the revival of Skiff rowing, this was without doubt the largest regatta to-date.

A total of 27 races where on the schedule.

Like the Fintown Regatta this event attracted a large number is spectators who were treated to a spectacular display of rowing.

Unlike land based event, Regatta’s are subject to weather and tides.

In Donegal Town there is the added difficulty of coordinating the event around the schedule of the Waterbus.

A massive event to organise and coordinate, but this was achieved through the efficiency of the host club and the sporting cooperation of all the competing clubs.

The two regatta’a today’s have set the standard for the season and all participating clubs are now looking forward to a very competitive rowing season ahead.