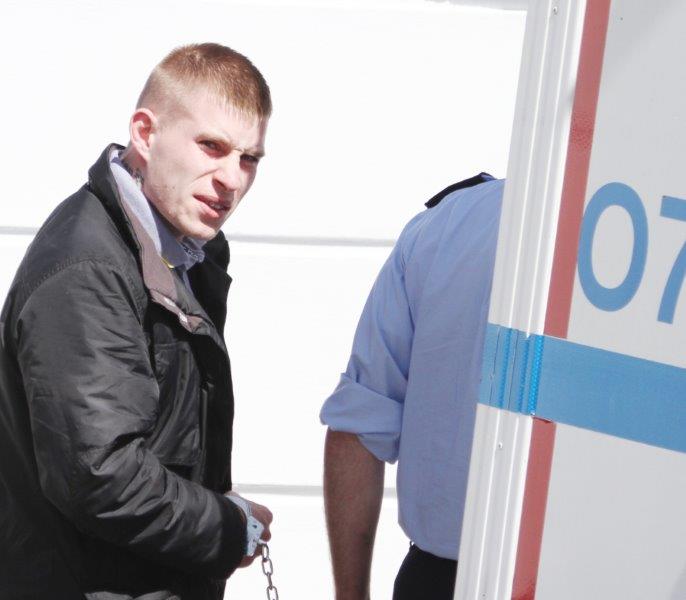 Going back to the clink: Lafferty

A NOTORIOUS Donegal burglar has been given an extra two months behind bars after making a death threat – in court!

Matthew Lafferty has a string of previous convictions for breaking into homes and drugs offences.

The 22-year-old is serving a five year sentence for an aggravated burglary at a home in Co Mayo in which he terrorised an elderly couple.

That conviction followed his arrest her for terrorising a pensioner near Kilmacrennan.

Letterkenny District Court heard that during a court appearance there on September 9 last year Garda Brendan McMahon had witnessed the threat.

“It was at 10.45am and Mr Lafferty was seen holding his hand up and making a cut throat gesture in the direction of a Mr Dean Kelly. He could also be seen mouthing words ‘I’m going to kill you’.

Lafferty, formerly of Ballykeeran Kilmacrennan and now with an address at Castlerea Prison, admitted one charge of threatening behavior in a public place.

Defence solicitor Patsy Gallagher told Judge Paul Kelly: “Mr Lafferty is no stranger to the court and to yourself.

“He is now 22 and he has spent a considerable period of his life in custody, mainly due to his savage drugs and drinks addiction.

“He has committed numerous offences – one of them as we know even in this court.”

Mr Gallagher said Lafferty had a “very short fuse” but was making progress in prison and was now drugs free.

“There is no defence on this charge – it was done in full view of everybody. He has a substantial criminal record at this stage; and work is underway to prevent it getting any longer when he gets out. We are on the right track.”

2 EXTRA MONTHS BEHIND BARS FOR BURGLAR WHO MADE DEATH THREATS IN COURT was last modified: June 17th, 2014 by John2