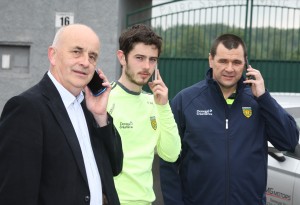 WITH thousands of fans heading for Clones and Lisnaskea this Sunday to watch the minors, seniors and senior ladies play Ulster Championship semi-finals, Donegal’s players have helped launch a safer driving campaign.

The County Health & Wellbeing Committee of CLG Dhún na nGall and the Donegal Road Safety Working Group have launched a campaign to encourage all road users to change their behavior and make these changes part of their lives in the future, which will save lives and reduce serious injuries on our roads.

The message is simple – make smart choices about how you use the roads, never ever drink or drug drive, strictly keep to the speed limits and reduce your speed, make sure you and your passengers are wearing seatbelts before you set off on a journey, no matter how short and never use your mobile phone for any purpose while driving.

The campaign asks motorists and passengers to make a personal commitment to drive responsibly and a special appeal is being made to all Donegal supporters traveling to this Sunday’s Ulster semi-final in Clones against Antrim and any subsequent games to drive with care.

On the road as on the pitch you need to be alert. The campaign is fully backed by Donegal GAA and Donegal Road Safety Working Group with Donegal Senior Team Player, Ryan Mc Hugh as its Ambassador.

Footballers and management will be encouraging people to make their pledge to decide every time they sit in a vehicle before they turn the key, that they will make smart choices about how they use the roads. The hope is that everyone takes note and thinks road safety when using the roads.

“This is another opportunity to remind football fans about their road safety responsibilities Fans should ensure the enjoyment of the game isn’t followed by tragedy on the roads,” said Brian O’Donnell.

“Individuals and organisations should follow their football team’s example and make a commitment to support this campaign and ask all their family members to adhere to the rules of the road at all times and lead by example. It is also important to factor in a rest break on your journey from Donegal to the game.”

Sean Dunnion, County Chairman said: “The new County Health & Wellbeing Committee formed earlier this year immediately identified that Road Safety should be a focus area for their plan for 2014 so we are delighted now to partner with the Donegal Road Safety Working Group in delivering a campaign for our members and supporters as they travel to venues across Ulster and indeed hopefully outside the province later in the season as they support the Donegal Minor and Senior football teams.”

Ryan Mc Hugh said: “It was a great honour for him to be selected as the Donegal GAA Road Safety Ambassador and looked forward to working with both the County Health & Wellbeing Committee and the Donegal Road Safety Working Group in promoting a safe driving culture for both young and older drivers.”

He also appealed to everybody, both drivers and passengers, to heed the many safe driving messages that will be delivered particularly over social media channels in the coming months.

Donegal’s minors taken on Antrim in Clones from 12.15pm this Sunday, with the senior game to follow at 2pm.