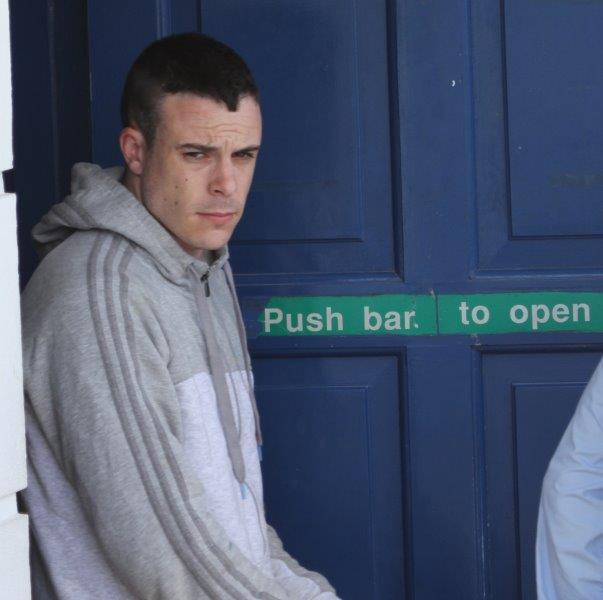 JAIL FOR THUG WHO ATTACKED INNOCENT COUPLE IN TAKEAWAY

A DRUGS-crazed thug has been sent to jail after a judge heard how he launched a vicious attack on an innocent couple who stopped off at a takeaway after a night out.

Cillian McMenamin, 24, from Chapel Road in Dungloe, launched an attack which left his victims with multiple injuries.

McMenamin’s case was heard at Letterkenny District Court as he was already serving a jail sentence for driving offences.

Inspector David Kelly told the court that in the early hours of April 14 last year a woman and her husband had stopped off for a takeaway on their way home.

Sharon McKelvey had been working as a singer and karaoke operator at premises in Dungloe earlier.

She and gone into the Midnight Express takeaway with her husband Patrick.

“She spotted a man standing by a poker machine wearing a hoodie. He was very drunk. He  began to shout abusive comments towards the non-nationals working at the takeaway. He was shouting that he wanted free burgers and made several other comments,” Insp Kelly told the court.

At that point Patrick McKelvey objected to the abuse being given out by McMenamin.

The accused man, who had taken a cocktail of prescription drugs and drink, called Mr McKelvey “a pile of sh***” and began to throw punches at him.

Mrs McKelvey stepped in at that stage.

“I put up my hands and pleaded with him to stop. He grabbed me by my jacket and threw me out of the way to get at Patrick. I lost my footing because of the force and hit my head on a window and I realised I was bleeding from my head and mouth,” she said in a statement read to the court by the inspector.

She then saw Patrick being dragged outside the takeaway where McMenamin repeatedly kicked his victim on the ground, including in the face, said Inspector Kelly.

“Do you want to hit me now?” McMenamin had shouted.

He tried to kick the couple’s car and then shouted at them: “I’m going to find out who your family is and they’re all dead.”

Gardaí arrived at the scene a short time later and arrested McMenamin.

Inspector Kelly said McMenamin had 27 previous convictions including for assault, car theft and possession of drugs and a flick knife.

Defence solicitor Frank Dorrian said his client had a “vague and patchy memory” of the events because of his drugs and drink addiction.

Judge Paul Kelly said McMenamim had launched “a random act of violence against a couple on their 50s who were causing no offence whatsoever.”

Reading from medical reports before the court, the judge said Patrick McKelvey had been attacked in the takeaway before being dragged outside and attacked again.

Mr McKelvey had suffered multiple bruises, a fractured rib, a collapsed lung and was in pain for six weeks afterwards.

He had been forced to turn a job offer due to the pain he suffered in the attack and went on to suffer anxiety as a result.

“He punched Mrs McKelvey in the face and left her with a fractured finger, bruising to her arms and pelvis and cuts to her head and mouth,” said the judge.

“These are dreadful injuries. The fact that Mr McMenamin had taken a cocktail of alcohol and drugs is not an excuse. This was a random act of violence which had appalling consequences for this totally innocent couple.”

The court heard McMenamin had been given community service for previous offences.

“This was a middle aged couple finishing a night’s work and getting food on their way home,” said the judge.

He then turned to McMenamin and asked him: “Do you realise what you have done to the victims in this case?”

JAIL FOR THUG WHO ATTACKED INNOCENT COUPLE IN TAKEAWAY was last modified: June 18th, 2014 by John2