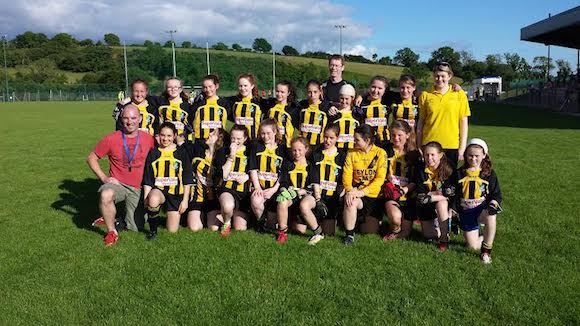 Last night, Bundoran Ladies brought back the first ever u14 Ladies Title to the town after a tough encounter against Convoy played in Donegal Town. The score line doesn’t reflect fairly to the competitive edge that Convoy added to the game.

Bundoran had a dream start when dual Captain Rhona McEniff powering home the first goal in the first minute. Convoy struggled to get out of their own half with all of the pressure imposed on them by the sea siders. As a result, Aoife Corbett had Bundoran’s second goal in the net soon after.

Convoy’s game plan seemed to be to kick the long ball into full forward Shauna Ward. This paid off midway in the first half when they scored their first point.

Now it was Bundoran backs that were under pressure with Convoy pulling back two goals. At half time Bundoran led 4-03 to 2-01.

Second half Bundoran’s Megan McEniff scored a point immediately. It was clear that Bundoran had raised the tempo with Convoy looking more tired in the scorching June sunshine.

The final score line would make you believe that this game was never Bundoran’s to lose, but Convoy always looked dangerous and were guilty of missing numerous goal chances that if scored may have led to an exciting finale.

In the end the referee blew the final whistle and captains Rhona McEniff and Rachel McGee were presented the plaque and thanked Convoy, Referee, coaches etc.

On arrival back to Bundoran, the plaque was paraded thought the town by the winning team, proud parents and supporters.

Every player was superb on the night.