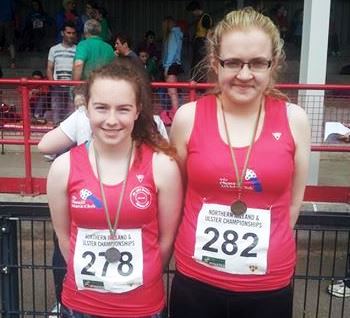 Success for club athletes on many fronts

Last weekend was a roller coaster of successes for club members on the competitive front. On the track a number travelled to Antrim for the final section of the Ulster/ANI Track and Field c/ships while on the road numerous fine performances were recorded at the Lifford 5k [Friday evening] and Enniskillen 10k. The Mullaghmore Sprint Triathlon had ideal conditions and again a large number of club athletes, many completing their first triathlon, recorded excellent times. Finally on Saturday evening Karl Griffin, who continues his build up towards the World Junior C/ships in Oregon, in July recorded another sub 1min 50secs /800m time at an Irish Milers Club meet in Dublin.

Antrim – Saturday – Excellent results/performances this morning at the Antrim Forum from Clara Herron,30.70m, U17Hammer,PB and Gold. Later in the day Clara added a 2nd winning performance of 10.52m in the Shot Putt. Chloe Masterson, records 26.30m, in the Hammer and Silver while Pole Vaulters, Caoimhe Byrne, 2.60m/PB Gold and Katie Hoad,2.50m/PB and Gold – in different age groups. Caolan O’Callaghan clears 1.75m to win the U18 High Jump. Christopher Doherty travelled last week to the MPT in Belfast to compete in the Pole Vault. Result — the event was cancelled due to a waterlogged venue. Today he returned to Antrim and responded by clearing a new P.B. height of 4.10m – well done Christopher, Caolan, Katie, Caoimhe, Chloe and Clara.

On Friday evening, at a well-supported and organised 5k in Lifford the following club athletes won category prizes Richard McCarthy, M50, 18mins 30secs; Donal Haughey, M55, 19mins 51secs; Jackie Harvey, W50, 22mins 27secs and Vera Haughey 22mins27secs.On Saturday over 1,000 finishers were recorded at the Enniskillen 10k. Pride of place must go to Ballyshannon man Daniel Mannion who won the junior section with an excellent time of 40mins55secs. Other local athletes to come home very pleased were Brendan Ward, 37mins 42secs;Chris Goan, 43.42;Rodney Irwin,M40, 45.02; Kevin Coyle, 46.44; Terry Hughes, 48.45; Brain McMullan, M45, 48.38; Loretta Cullen, W45, 49.10; ; Craig Hill, 52.27John Magee, M45, 52.28; Michael Gallagher, M40, 53.17;Christopher McGee, 59.31. One club athlete made the journey with the goal of running a PB. However Sharon Thomas-Meehan got held up in an accident traffic jam and missed the start by a few minutes. She indicates that she does not want sympathy.

In Irishtown at an Irish Milers Club sponsored meet in Irishtown, on Saturday evening, Karl Griffin runs 1min 49.52secs,a PB and the 4th sub 1min 50secs in as many weeks. The race won by English athlete Joe Maynard found less that 0.2 secs separating the following three athletes. Karl was overhauled by David McCarthy, nephew of club road athlete/coach, in the final 50metres. Early this week McCarthy was selected on the Irish team for the Europa Cup in Estonia next weekend. Karl continues to improve and is looking forward to the World Junior U20 in Oregon in late July

Following the recent retirement of Paddy Donoghue from active coaching, the club at its monthly meeting on Monday night last agreed to organise a gathering of all Senior and Masters Tír Chonaill athletes in Dorian’s Hotel on Wednesday 25th June. The meeting, hosted by club chairperson David Doherty will discuss Training venues, Schedules and the requirements of athletes going forward. Senior Club coaches will be in attendance.

All senior and masters athletes are invited to attend. Refreshments will be served. Contact David 086 8011540

The clubs annual summer camp from 30th June to 4th July –daily 9am to 2pm has received a very positive response with large numbers making application daily. Completed forms should be left in either All Sports or Cara Pharmacy Donegal Town or forwarded to Camp Co-ordinator Jackie Harvey, 086 4052823, Drimark, Donegal Town

On Saturday, a number of club athletes will represent the Ulster Schools at the annual Tailteann games Inter pro in Santry while seven younger athletes will travel to Tullamore for the National Children’s Games ad relays. Meanwhile on Sunday Women and Men’ s teams will contest Round 2 of the National Track and Field League in Athlone. Best wishes to all